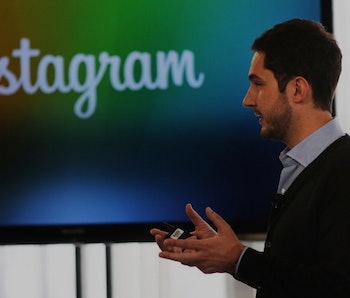 It seems like many of our social media platforms want to choose what we like for us. On Tuesday, Instagram announced that the photo- and video-sharing app is developing an algorithm that will choose what content you see first instead of coming up in the order they were posted. Instagram follows in Twitter and Facebook’s footsteps — Twitter announced its algorithm in February and Facebook has been filtering feeds since 2009.

Instagram seems to know this is a controversial move. In the announcement — read it in full here — the company states it wants to really take the time to “get it right.” Instagram says the algorithm is important because it wants to give users a better experience, but it also might be because the company wants to bring in more revenue, attract advertisers, and, of course, grow its user base

Users both for and against the change took to Instagram to tell the company what they think of the change.

And there’s also quite a number of questions that users want answered before the algorithm goes into effect.

Instagram’s reasoning for creating the algorithm is because users miss a large proportion of posts, so it wants to make sure you get to see all the “important” ones.

“On average, people miss about 70 percent of the posts in their Instagram feed,” Kevin Systrom, co-founder and chief executive of Instagram, told the New York Times. “What this is about is making sure that the 30 percent you see is the best 30 percent possible.”

The company says that “to improve your experience, your feed will soon be ordered to show the moments we believe you will care about the most.” It’ll prioritize posts from your favorite bands, artists, and friends. The algorithm takes you out of the equation.

We don’t know for sure, but it sounds like Instagram is leaning toward making the change mandatory for all users. Right now, you can turn on and off Twitter’s timeline algorithm and switch Facebook’s news feed to “top stories” or “most recent.”

Instagram’s announcement indicates that the switch won’t be for a few months, which seems a bit odd to be announcing it so soon. Perhaps the company hopes everyone will forget how upset they are by the time the filtering begins, or maybe Instagram is giving the single-digit percentage of users a heads-up that it’s going to be testing the algorithm out on them.

Instagram’s Systrom reassures that this is going to be a slow and gradual change. Instagram will still be the same — at least for a little while longer. “It’s not like people will wake up tomorrow and have a different Instagram,” he told The New York Times.

4. Is this a way for the company to get more ads?

Market researchers are mulling over this question. Since Instagram will have control over what you see, it could bump up companies’ advertisement posts. The revenue from ads is definitely one plausible explanation for building the algorithm. As we know, after Facebook — one of the top digital advertising platforms in the world — began filtering feeds, users saw more “suggested posts.”

“The moment when an Instagram ad starts looking like a banner, the ‘unfollows’ will come,” Larry Lac, director of social media marketing at Havas Worldwide told Adweek.

5. What sort of photos will appear first?

We’re not sure exactly how the algorithm will choose what content that appears at the top of your feed — whether they will pull from photos you like, profiles you’ve lurked, or videos on which you’ve commented. What we do know is that the machine-learning algorithm will factor in the likelihood a person will be interested in a video or photo, the time the picture was posted, and the relationship between the two users.