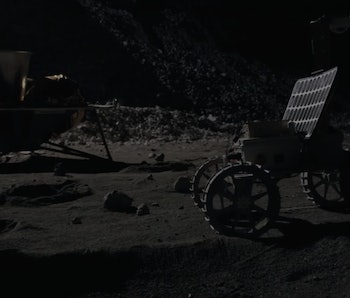 Google Lunar XPRIZE’s J.J. Abrams-directed Moon Shot documentary series was officially dumped in its entirety on YouTube today. If you’re one of the binge-watching breed, this one’s for you.

The nine-part series follows 16 teams (eight in detail) as they compete for the $30 million XPRIZE award. To win, a team must construct a rover, land it on the moon, drive it 500 meters, and then beam back HD video of the whole thing by December 2017. (Here’s the preview in case you missed it).

Bad Robot, Abrams’ production company, and Academy Award-nominated director Orlando von Einsiedel got together to tell the story of this actual moon shot. So if nothing else, the videography is worth checking out.

Also, since each episode tops out around seven minutes, it’s more of a lunchtime binge than a weekend time suck. But if binging isn’t your thing, here are some blurbs to help you pick and choose.

Wind blowing through a corn field and a metal hammer striking solid concrete blocks is probably not the first scene you would expect in a documentary series about moon travel. But Moon Shot wastes no time in breaking popular conception.

Episode 1 follows Red Whittaker and Astrobotic in Pittsburgh, Pennsylvania. Whittaker describes himself as such: “A professor, businessman, and a farmer. And now, I’m going to the moon.” By that he means he is a professor at Carnegie Mellon and the owner/operator of a working Pennsylvania cattle farm. Robots, though, are the through line of this life.

Whittaker’s rural lifestyle is a foil to his team of students and the robotics work they are doing.

“I am to the point in life where the machines are more active than I am,” Whittaker says. “I’m far enough along to know that it’s in good hands completely without me. I am slowing down, but what I am about is moving faster and faster and faster.”

Robert Böhme and his German team call themselves the Part-Time Scientists, and it’s easy to see why. The group consists of a game developer, a “space geek,” a dental tool manufacturer, and the “brain of the team.” But thanks to open information and software (particularly NASA’s) they can figure it all out and compete for the XPRIZE.

“I am definitely not someone special,” Böhme said. “I am totally unqualified for doing any kind of moon missions, but you know that doesn’t keep me from doing it.”

Böhme grew up in Eastern Berlin when Berlin had a wall running through the middle. Now, he’s obsessed with open data and can’t imagine a world without it.

Their method of robotics? The “KISS” principle: Keep It Simple, Stupid.

Deepana Gandhi grew up in a rural Indian town called Ooty. Women rarely have the same opportunities as men there, let alone in the field of science and math that Gandhi was interested in.

“I love everything about mathematics,” Gandhi says, “from zero to infinity.”

She wasn’t going to let cultural perceptions of what professions women should be in hold her back from the work that she loves. She was one of three girls in her classes while earning her master’s degree, and she felt like no matter what she did it would never be enough and nearly gave up.

Her parents didn’t let her give up though. “A girl can do whatever a boy can do,” her dad would tell her. Now, she’s working with team Indus to send a robot to the moon.

Alex Dobrianski, like Böhme from season two, grew up on the Soviet side of the world in the Cold War era. He moved to Vancouver from the Ukraine as a space-obsessed man trying to build a better life for his wife Luda and their three kids.

“My mind is not fully mathematician, not fully physicist, not fully engineer,” Dobrianski says. “I am just trying to reach the moon.”

Google XPRIZE is his shot. He took his retirement money and entered the competition and called his group Team Plan B. His kids thought he might be having a midlife crisis and his wife thought the moon stole her husband, but now the whole family is part of the team. Episode 4 is nothing but one big family love fest.

The 2011 tsunami that devastated Japan and caused the meltdown at Fukushima is still fresh on mind of the public. Aerospace engineering professor Kazuya Yoshida and his family faced the wave head on.

Surviving the tsunami and facing an uncontrollable environment that could strike again at any time, Yoshida started looking past the Earth’s atmosphere.

“If something happened on the Earth, colonization on the Moon is a fascinating idea.”

Yoshida and his team, called Hakuto, want to use their rover in a way no one else is: to explore the lunar landscape for a suitable location for human habitation.

“I came to the united states with $5 in my pocket and an amazing dream,” Naveen Jain says in the opening Episode 6.

It’s been decades since he first came to the United States in 1983 for a humble start in a small town filled with people who had never seen a brown person in their life. It passed. He moved to Silicon Valley and became a successful internet entrepreneur.

“When I was poor and hungry in India looking up at the moon,” Jain says, “it gave me satisfaction that the richest person in the world is looking at the same thing no different than I am.”

He wants to go to the moon to find a solution to the energy problem. Nuclear is the way of the future, he believes, but the nuclear waste is a problem. The moon and moon dust has Helium 3 that could be used to create enough energy for years, we just need to get it — so Naveen co-founded Moon Express in Cape Canaveral, Florida.

Co-founder Yariv Bash and his team Space IL was one of the last teams to enter the Google Lunar XPRIZE. But that doesn’t mean they aren’t a force in the competition.

The Israeli space industry supports Bash and Space IL. His robot hovers unlike the other project plans. Yes, it is rocket science.

The desperate political environment in Israel isn’t lost in Episode 7.

“When you see the earth from space, you can’t see any borders,” Bash says. “You just see one planet filled with people. when people realize that most of the time is spent on useless things such as fighting, that’s when things will change.”

Jana González isn’t your average nine-year-old girl who lives in Mexico. She turned a love of playing video games into a love of programming videos after her parents got a divorce. From programming, she became involved with robotics with an all-girl team competing in a worldwide competition.

What started as an escape from her problems has turned into a love of robotics inspired by the lunar robots. She named her robot design Ixchel, after the goddess of the Moon in Mayan culture.

This is the XPRIZE’s documentary attempt to prove they aren’t just cherry picking people near the end of their life. When González and her Moonbots team won the global competition, it was the first time a team from Mexico has done so.

González’s next goal? Build a robot that can reach the moon.

Episode 9: “Race for the Prize”

To really understand the big picture, watch this one first (if it’s not too late).