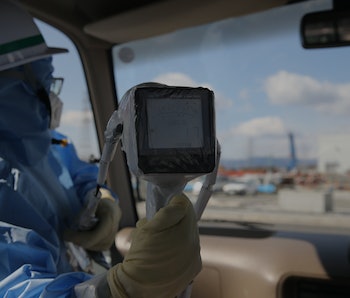 Five years ago today, an 9.0 magnitude earthquake struck the eastern coast of Japan, sending a massive tsunami crashing into the nation’s coastline, triggering what would soon become the world’s worst nuclear disaster in 30 years. The tsunami killed more than 11,000 people, and the entire world watched in horror as a nuclear power plant went up in flames spewing radiation deep into the Pacific Ocean, a stream that persists, half a decade later.

The Tsunami waves disabled the cooling mechanism for the the Fukushima reactors, leading to a hydrogen explosion. Luckily, unlike in Chernobyl, the facility’s containment vessels remained standing, and most of the radiation simply leaked into the Pacific Ocean. The Fukushima meltdown may have been the first nuclear accident to trigger a level 7 threat from the International Nuclear Event Scale since Chernobyl, but the vast gulf of the Pacific prevented the same long-term waste and devastation.

Of course, the Fukushima nightmare is far from over; the process of containing the radiation is decades from completion. Tokyo Electric Power Co., which operated the power plant, is currently constructing the world’s largest ice wall around the facility to contain the runoff, but a series of delays have pushed the date to inject water for freezing to later this year.

300 metric tons of ground water roll through the plant every day, picking up tracks of nuclear radiation. The wall would keep the water out, but would do nothing to clean up the nuclear spill.

Nuclear fuel in three of the reactors remains unaccounted for, even five years later. Meltdowns in each of these reactors left fuel exposed, but Reactor One may have seen the fuel melt through its pressure vessel and fall to the reactor floor. The company has sent two different specialized robots to locate the fuel and possibly remove it, but the radiation was so intense that it quickly destroyed them both.

Even the current $20 billion cleanup plan to remove fuel in 2021 and continue for three or four decades is drawing skepticism.

“The idea that fuel debris removal will begin in 2021 is not realistic – it’s just not going to happen,” Shaun Burnie, senior nuclear specialist at Greenpeace Germany told The Guardian. “No one really knows how long it will take, but it will be decades and decades and decades.”

The ambitious pace set by Tokyo Electric has some worried that moving too quickly may reopen the wound. Toyoshi Fuketa, a nuclear regulatory authority commissioner, criticized the current plan last month as unnecessarily rushed.

“I wonder if it is desirable for work to extract fuel debris to still be going on 70 or 80 years from now,” Fuketa wondered to reporters. “There are a number of other options, including removing as much fuel as possible and solidifying the rest.”

As for the people who were forced to flee the region? Many won’t return, since questions about the health and economic impact of the disaster are unclear. About 100,000 people are dislocated in the area, and the government is just beginning to lift some of the evacuation orders. A recent survey of refugees found that two-thirds never intend to revisit the area, a foreboding possibility for a region that saw the country’s largest population decline over the last five years.

So the nuclear disaster may not be Chernobyl, but the ghostly images of abandoned communities make Fukushima feel all too familiar.

More like this
Innovation
16 hours ago
Look: This tiny robot could change medicine forever
By Katie MacBride
Innovation
Sep. 22, 2022
Trash can-sized robots could revolutionize how you travel — but there's a catch
By Molly Glick
Innovation
Sep. 21, 2022
Look: Drones could be the future of 3D-printed architecture
By Jennifer Walter
Related Tags
Share: