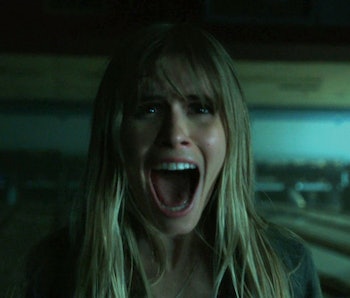 The timing of TV show renewals is odd nowadays. For some, it takes a good amount of deliberation and audience-building; for others, a second season is guaranteed before the pilot episode even airs. But for MTV’s Scream series of this past summer, it took a short-lived crest amid uneven ratings to get the seal of renewal, just about halfway through the series. Yet, the net impact of the series was underwhelming, which may have prompted MTV to change showrunners mid-stream, in hopes of better or more sustained success in Season 2.

The critical consensus is that the show didn’t go beyond the reference-augmented worship of Craven’s original film series. The decision to stretch a basic slasher film arc across 10 episode is a bold one. To enjoy Scream — not that we necessarily have an example to support this theory — one probably needs to get slightly more invested in the characters than the series allowed us to. In Season 1, we had an involved, plot-assembled piecemeal out of very familiar horror-movie situations. But ultimately, the show ended up treading water to maintain its ambitious duration, with scares and scenarios that often felt redundant. Over an hour and a half, it works, but over nine-plus hours? It’s much dicier.

What is the scenario for the new season? The reports indicate that the series may stick with the essential conceit of Craven’s films. Scream 2 picked up with the remaining characters two years after the first film; in the show’s second season, we’ll be following Emma and the gang six months after Season 1. The central mystery will be the identity of the killer’s partner (I will omit the name for readers who have gotten this far in the article but missed the show’s conclusion). Aubrey, in particular, will have to fear for her safety, faced by anonymous blackmail and threats. Former co-showrunner Jill Blotevogel hinted in September that there would be twists ahead in Aubrey’s storyline, and even suggests that she is not necessarily the killer’s only accomplice:

“I’m saying that there is undeniable evidence at the end of the finale that she was in contact with [redacted]. I can’t say too much about what she has done, but we do know that she was complicit in something. I will neither confirm nor deny, but hopefully it did what it was supposed to do in telling you there’s much more to come.”

The Brandon James mystery will also continue to unfold — at least, according to Blotevogel — and flashes back to old history. After all, the show did leave some answers unexplained, and so there’s no doubt Season 2 will be detailed and complicate the backstory significantly. However, since Blotevogel and Jamie Paglia, her collaborator, were ousted from the show by Dimension TV, it’s unclear whether the focal points have changed since September.

With seven members of the cast dead from last season, the show will repopulate with new faces. We have the addition of an obsessive, straight-A do-gooder student (Kiana Lede), another outsider character and horror aficionado who is new in town (Santiago Segura), his sheriff father (Anthony Ruivivar), a cool new psychology teacher (Austin Highsmith), and more.

The problem with Scream’s first season mirrors the problem with another polarizing “Scream”-titled show, the Murphy/Falchuk-produced Scream Queens, which despite piquing viewers’ interest with its erratic style at the beginning, lost the plot later on in its run. It, too, will be recouping after revealing the identity of the “Red Devil” for an uncertain Season 2. But one-dimensional slasher madcappery is hard to make gripping — or even simply interesting — across a full-series run. Continuing with the Season 1 plotline, more or less, seems like a dangerous move in terms of maintaining interest — perhaps an anthology format may be more suitable for a show like this. Let’s hope that a refurbished cast, with some more colorful personality types, will make this season a sustainable watch.