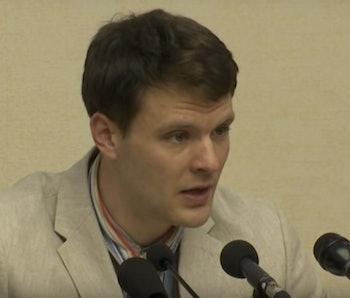 In North Korea, Otto Frederick Warmbier has been sentenced to 15 years of hard labor for allegedly trying to steal a political poster in December from Yanggakdo International Hotel in the city of Pyongyang.

North Korea’s Supreme Court convicted the 21-year-old University of Virginia economics student during a one-hour trial this morning. The court’s argument claims that Warmbier’s actions were influenced by the CIA and a member of a church in Ohio.

The sentence immediately follows former U.S. ambassador to the United Nations Bill Richardson’s efforts to get North Korea to release Warmbier. On Tuesday, he met with two North Korean diplomats; Richardson told the New York Times: “I urged the humanitarian release of [Warmbier], and they agreed to convey our request.” Richardson helped release American prisoners in North Korea in the past, including locating six U.S. troops in 2007 who were missing since the Korean War.

In January, Richardson told USA Today how North Korea’s government tends to carry out these trials:

“It’s intensive negotiations back and forth, first with a U.N. mission in New York and then when you are there, a lot of meetings, a lot of persuasion,” Richardson said. “The release happens when the North Koreans feel that the hostage is of no more use, they’ve milked it.”

Warmbier was visiting North Korea on a five-day vacation, and spent part of it on the China-based touring company Young Pioneers Tours’ “New Year’s Party Tour.” He was arrested on January 2 in Pyongyang right before he was about to board a plane to leave the nation, the state agency declaring he was “arrested while perpetrating a hostile act against the [North Korea] after entering it under the guise of tourist for the purpose of bringing down the foundation of its single-minded unity at the tacit connivance of the U.S. government and under its manipulation.”

The North Korean government arranged a press conference in February for Warmbier where he pleaded for help and protection:

Warmbier read from a prepared statement:

“On the morning of December, 30 2015 I asked my UK tour guide where they keep the important slogans in the Yanggakdo International Hotel. She said they were in staff-only areas. That night I alone walked around the second floor lobby.”

Also during the press conference, Warmbier read this weird statement:

Warmbier is the second American currently a prisoner in the country that recently tested a hydrogen bomb, which North Korea’s United Nations delegates proclaim will allow it to “wipe out” the United States.

More like this
Culture
Oct. 3, 2022
Netflix has the perfect sci-fi thriller to kick off your spooky season
By Jake Kleinman
Culture
1 hour ago
You need to watch Spielberg’s most divisive sci-fi movie on Amazon Prime ASAP
By Robin Bea
Culture
Oct. 2, 2022
Rings of Power's biggest weakness makes it the anti-Game of Thrones
By Jake Kleinman
Share: