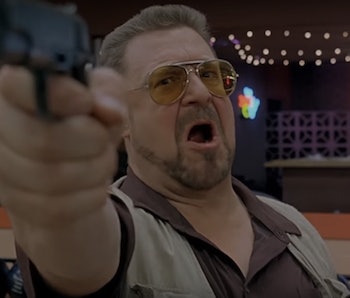 No doubt, John Goodman is on fire these days, and his bad guys are more relevant than ever. Best known for embodying a panoply of wrongdoers during his illustrious and seemingly endless career, his next big film role will be a real life hero: former Boston Police Commissioner Ed Davis during the Boston Marathon bombing in Patriots Day. But, I maintain that Goodman does his “bad man” the best, as exemplified by his portrayal of a psycho in recently released 10 Cloverfield Lane, his roles from The Big Lebowski to Barton Fink, and even in his smaller, though equally unforgettable roles in Inside Llewyn Davis and Treme.

No one does spooky quite like a comedian: Just thinking about Robin Williams in 24 Hour Photo gives me major chills. And when Goodman — whose own comic gifts hearken all the way back to his days on Roseanne — does dark, man, does he go dark. Very few actors can tread the fine line between funny and scary like Goodman: Just think of the comic gusto he manages to incorporate as a big-time lender in The Gambler, when he warns Wahlberg’s protagonist not to owe him money, accompanied by an opening up of the “fuck you” firehose.

As blustery Walter in The Big Lebowski, a trigger-happy Vietnam veteran and one of the Dude’s best friends, Goodman is not only vastly entertaining but also provides unexpected insight into America’s problem with gun control. Even in Goodman’s all-too-brief role as Creighton Bernette in Season 1 of Treme, who could forget his descent into suicidal depression, and simultaneously, his superbly hilarious and articulate YouTube rant? Again, replete with the f-word: “Fuck you, you fucking fucks!”

Perhaps Goodman’s darkest cameo of all time is as the drug-addled, half-paralyzed blues musician in Inside Llewyn Davis who struggles to drag himself to Chicago. It doesn’t matter that Goodman mostly mumbles and grumbles his way through his few lines; while his sheer physical presence tends to dominate the screen, it’s his barely suppressed rage and bitterness that lends the scene it’s viscerally poetic, tragicomic quality.

What’s also kept Goodman from being typecast by Hollywood as the go-to bad guy is his incredible range of villainy; astonishingly, he never hits the same note twice. This is because no matter how crazy a character Goodman depicts, there’s always a persistently identifiable — and hell, even likable — layer of humanity. Often his “monsters” are complicated, fully-fleshed out individuals who have taken a wrong turn somewhere in life, and in their head. As Howard in 10 Cloverfield Lane, Goodman may be a paranoid, delusional psychopath keeping a young woman in an air-tight bunker. But, he also occasionally drops his tense surface to reveal a more reasonable, if not resourceful man who genuinely fears the apocalypse — and has prepared himself with a fully-stocked shelter — just in case.

Goodman’s masterful ability to embody the paradox of good and evil, to go from amicable to terrifying at the drop of a hat, is also demonstrated in my favorite Coen brothers film, Barton Fink. Here, Goodman plays murderous traveling salesman Charlie “Madman Mundt” Meadows: a kind of Willy Loman-type turned sociopath. With the red-blooded, all-American attitude of good neighbor and Samaritan, Charlie befriends the lonely Barton, offers him advice — and even ends up helping him dispose of a dead body. True, Charlie turns out to be a serial killer, but also, undeniably, an incredibly good-natured and loyal buddy.

With his boyish grin, burly frame, and down-to earth, “guy next door” attitude, Goodman brilliantly epitomizes our modern-day Patrick Bateman, a troubling icon of late capitalism: bloated, paranoid, and out of touch with reality. His dark roles portray the best and the worst of traditional societal mores gone wrong; Goodman’s characters could be straight out of the fifties, except that they find themselves in 2016, which makes them even more terrifying. As an actor, Goodman’s undercurrent of anger always feels real, raw, and, hence, our closest approximation to a kind of truth in our age of moral relativism (or worse, total apathy). Undeniably, Goodman’s rage and incomprehension on-screen all too often mirrors our own, as a deeply-embedded aspect of everyday American life.