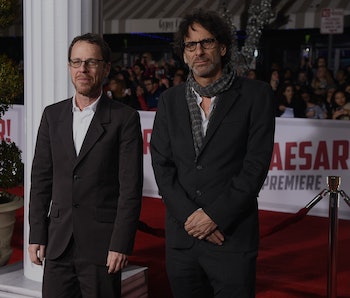 The article below contains spoilers.

There’s no doubt that the Coen brothers are in the top handful of American filmmakers working today. While they may not rake in as much money as other feted auteurs like, say, Christopher Nolan, the tandem filmmaking force of Joel and Ethan Coen have reached the enviable milestone of being able to do whatever the hell they want. Will their next movie, a multi-genre send-up of 1950s Hollywood called Hail, Caesar!, gross $100 million? Probably not. Mostly, they challenge your intellect with their own stripe of offbeat humor. But there’s another detail that sets the Coens apart from the rest. Most of their movies never end.

We’re not talking about runtime here; one of their most popular movies, No Country for Old Men, is actually their longest. Rather, their endings tend to hang open like a broken screen door. They don’t explicitly resolve the main conflict, and they remain intentionally obscure. The guy and the girl almost never kiss, and the hero almost never rides off into the sunset. Even when the Coens offer a real conclusion, they tend to slyly subvert those tropes.

You love the Coens; I love the Coens; everybody loves the Coens. But you can be forgiven if you’ve missed this tic of theirs. As a refresher, here are a few of the “endings” of their most recent movies:

No Country for Old Men

Those three aren’t isolated incidents. Skip to the end of Burn After Reading, True Grit, The Big Lebowski, O Brother, Where Art Thou?, Fargo, Miller’s Crossing, and Barton Fink. Soft endings abound, and yet, with the exception of Burn After Reading, they’re all highly regarded. Intolerable Cruelty, at least, ended with the happily-ever-after cliche, and perhaps not coincidentally, it was one of their rare mediocrities.

The reality is that open endings are fully attuned to the themes the Coens try to lay down. Their visceral embrace of the unanswerable separates Joel and Ethan from lesser filmmakers. It takes brass ones to leave audiences without pat answers; many writers or directors try to emulate and wipe out. The difference is that Joel and Ethan Coen never conflate mere ambiguity with profundity.

The easiest conclusion about the non-conclusions may be considered a cop out, but these anti-endings simply acknowledge that life moves on. The notion that a character or characters would be inexorably changed at the end of whatever situation they’re in is the most absurd thing that could happen in the Coen brothers’ whole filmography. Fargo’s Marge Gunderson (Joel Coen’s wife, Frances McDormand) helped catch the bad guys — or what’s left of them — and despite the closure she has on the cusp of giving birth, she still struggles with the meaning behind their horrible crimes. O Brother, Where Art Thou?’s Odysseus-like Ulysses Everett McGill (played by the Coen mainstay George Clooney) got into some adventures. And yet, his iliad continues.

We must, after all, consider such a fate — surviving, staying in motion — the equivalent of a happy ending for any Coens protagonist. Life just goes on that way. Even a man of constant sorrow endeavors to endure.