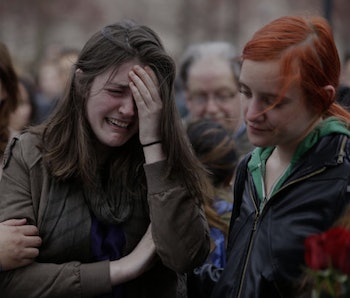 Eagle-eyed internet conspiracists claim to have spotted the same “tragedy brunette” in photos taken in the aftermath of the Aurora and Sandy Hook shootings, the Boston Marathon bombing, and, recently, the attacks on Paris. She’s an attractive woman in her early to mid-twenties with thick eyebrows, an aqualine nose, and a strong chin. In pictures, she’s crying.

Some think the poor woman is on the receiving end of some really bad karma while others claim that she’s part of the league of “crisis actors,” hired by governments to create panic. But let’s be clear: Neither of those theories is correct. These are not photos of the same girl.

What this remedial bit of tea leaf reading comes down to is “prosopagnosia,” the inability to to recognize faces. (The word is a mash-up of the Greek prosopon, for “face,” and agnosia, for “ignorance.”) We used to think that face blindness was a distinct medical phenomenon that people either suffered from or not, but a recent study suggests that all people fall somewhere on a spectrum. Brad Pitt’s inability to recognize people he’s met has earned him a reputation for being a jerk. Ditto the late neurologist (and noted non-jerk) Oliver Sacks, who struggled with facial recognition until he died. Then there are the “super-recognizers,” who are especially good at spotting differences between faces and, in this case, would be able to point to different hairlines and jaw contours.

Because people don’t routinely test their ability to recognize faces, conspiracy theorists and reasonable people alike have little way to know where they fall on the prosopagnostic spectrum. In other words, we’re ignorant of how prone we are to this particular genre of internet nonsense.

Bearing this in mind, we can empathize with those whose mental makeup pushes them toward the crisis actors camp. It is — on some level anyway — not their fault. As the American Psychological Association reported earlier this year, the ability to recognize faces depends on a wealth of cognitive processes as well as genetic factors. Shit is complicated:

“It is hard because all faces are physically similar to one another; face parts are in the same location in everyone, with two eyes above a nose above a mouth. In addition, we see them from many viewpoints and distances and under variable lighting conditions.”

It also doesn’t help that the photos going around make it hard to discern details of the eyes, nose, and mouth, which this 2012 study suggests are just as important to facial recognition as seeing the whole face.

What the “tragedy brunette” debate comes down to is Occam’s Razor. It’s a lot more likely that the girl in the first Aurora photo has a bunch of pretty brown-haired döppelgangers dotting the U.S. and Europe than it is that the same woman was present for four separate tragedies. It’s highly probable — in fact it is simply true — that we’re all a little bit face-blind. Just because we recognize someone doesn’t mean we’ve seen them before.

More like this
Science
Sep. 23, 2022
We finally know how many ants are crawling the Earth right now
By Jennifer Walter
Culture
22 hours ago
The 6 best sunglasses for a big head
By Maria Cassano
Culture
18 hours ago
These home upgrades are so cheap & impactful, Amazon can barely keep them in stock
By Christina X. Wood
Share: