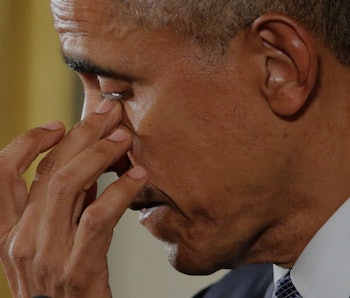 President Barack Obama unveiled on Monday new measures to limit the scourge of gun violence in the United States, and indicated that his administration will champion technological advances to help limit the damage caused by guns in America.

“The Department of Defense, the Department of Justice, and the Department of Homeland Security (departments) shall, to the extent practicable and permitted by law, conduct or sponsor research into gun safety technology that would reduce the frequency of accidental discharge or unauthorized use of firearms, and improve the tracing of lost or stolen guns.”

Some of that “gun safety technology” could limit the threat of children obtaining and accidentally firing guns. Guns that recognize fingerprints and radio-frequency identification to track guns are other options.

“If a child can’t open a bottle of aspirin, we should make sure they can’t pull a trigger on a gun,” Obama said.

Additionally, Obama pressed for further gun safety research in his memorandum, stating that “millions of dollars have already been invested to support research into a broad range of concepts for improving gun safety.”

The White House also trumpets the Internet Investigation Center established by the Bureau of Alcohol, Tobacco, Firearms and Explosives, which is “meant to track illegal online firearms trafficking,” and notes that the ATF “is dedicating $4 million and additional personnel to enhance the National Integrated Ballistics Information Network.” The Obama administration originally tasked the Department of Justice with researching gun safety technologies in 2013.

Contrary to the striking language and emotional shape of Obama’s speech on Tuesday, some of his ideas are not exactly new. Smart gun technology has been around for a while: There’s different RIFD and fingerprint-based technologies on the market, but no legislation that stipulates their widespread use.

Obama became emotional during the speech Tuesday, shedding a few tears while recounting the many victims of recent shootings which have put the issue of gun control in an increasingly polarized light across the United States.

Obama invoked the 2012 massacre in Newtown, Connecticut and regular street violence in his adopted hometown of Chicago: “[F]irst graders in Newtown. First graders. Every time I think about those kids it gets me mad…and by the way it happens on the streets of Chicago every day.”

“Just because it’s hard, that’s no excuse not to try,” to pass sweeping gun control legislation, Obama told the audience.

More like this
Entertainment
8.14.2022 1:30 PM
Why the Andor trailer could be setting up a Darth Vader fight scene
By Dais Johnston
Entertainment
8.10.2022 6:02 PM
Star Wars fans are mad about a "mistake" in Andor — here's why they're wrong
By Dais Johnston
Innovation
8.17.2022 6:15 PM
Can we terraform Mars? Scientists may have made a major breakthrough
By Jeff Nagle
Related Tags
Share: