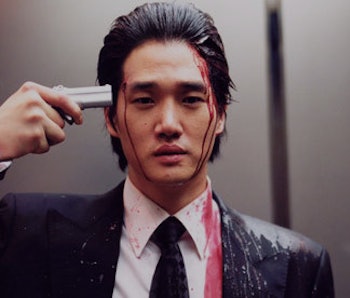 South Korean director Park Chan-wook created his Vengeance Trilogy in the early 2000s, and the second film in that series, Oldboy, earned him international acclaim. His films are stylish, violent, and often include infamously cruel plot-twists. He directed the severely underrated Thirst, a 2009 South Korean vampire romance-horror, produced Bong Joon-Ho’s Snowpiercer, and directed his own Stoker in 2013.

Now, several sources have confirmed that Chan-wook’s next project will be a film adaptation of Genocidal Organ, a Japanese sci-fi novel written by Project Itoh.

The novel, which has been called Japan’s top sci-fi book of the last decade, follows an American man traveling the world in search of a mythical brand of war technology. In Itoh’s novel, Sarajevo has been obliterated by a nuclear attack and a wave of super soldiers — influenced by psychotropic drugs and manipulative therapy — kill others without empathy. The novel was translated into English in 2012, and was well-received as a frightening look at modern warfare.

Park Chan-wook is a visionary, and the way he frames both physical and emotional brutality with the same care makes him the perfect auteur to tackle Genocidal Organ. Though the film will likely employ a great deal of action, it will also have to hamper its bloodshed by convincing its viewers that all violence has a price. Both Genocidal Organ and Chan-wook’s filmography delight in the kinetic energy of gore and combat while exploring the emotional fallout most American action heroes don’t have to suffer. This pairing is likely to ascend both Japanese literature, and Chan-wook himself, to a new level of international appeal.