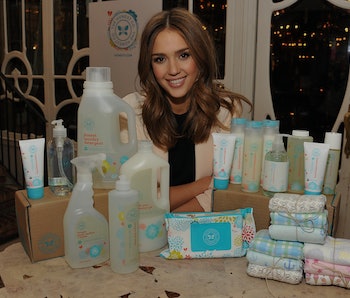 Jessica Alba’s Honest Company, valued at $1.7 billion in 2015, made its fortune as the healthy, eco-friendly alternative to mass-consumer companies like Proctor & Gamble. The Santa Monica-based organization’s demographic mirrored the very women who live in its vicinity: A mother who may spritz on some lemon-grass hand sanitizer post-Hatha hot yoga and stuff her spirit diaper tote with organic baby powder and healing balm.

But a Wall Street Journal investigation chips away at the seemingly perfect facade of Honest — the publication commissioned lab tests that reveal Honest laundry detergent contains sodium lauryl sulfate, a “forbidden” chemical in the company’s Honestly Free Guarantee. Honest has refuted this finding, stating that the WSJ makes reckless accusations.

“We stand behind our laundry detergent and take very serious the responsibility we have to our consumers to create safe and effective products,” the Honest company said in a statement emailed to the Los Angeles Times.

The Wall Street Journal argues both of the tests it commissioned show SLS in the Honest detergent. In a not so fast move, Honest returned fire with a certificate from its detergent manufacturer, Earth Friendly Products, stating there is no SLS in the detergent. And although chemical supplier Trichromatic West Inc. is supposed to test the detergent, that company told the Wall Street Journal no tests were necessary; SLS wasn’t used in the manufacturing process. Meanwhile, Honest claims it uses sodium coco sulfate (SCS) as a detergent alternative to SLS. But SCS actually does contain a mixture of cleaning agents, SLS included.

Why do we, the detergent using populous, care about this? On one hand, if the Wall Street Journal’s allegations are true, then it’s a blow to Honest’s image and rising power in the home goods industry. The other factor here is SLS more generally — is it really that bad for us? Honest seems to think so, having argued the detergent is an irritant that has no place in its product line.

But other companies don’t care as much. SLS is found in common items like Colgate toothpaste, Tide detergent, and Tom’s of Maine toothpaste, that mainstay in “natural” stores everywhere. It is one of 3,000 substances on the FDA-determined list “Everything Added to Food in the United States,” and is federally approved to be a direct food additive in egg whites, a whipping agent in the preparation of marshmallows, and a compound added to fruit juice drinks. It’s also found in shampoos, creams, and lotions.

Technically an anionic surfactant, a class of chemicals used for their detergent properties, SLS is a white or cream-colored crystal, flake or powder. It does not cause cancer, says the American Cancer Society, despite what chain emails in the 90s suggested. Studies determined it is not toxic when ingested. But undiluted SLS, if left for a prolonged time on skin, can cause extreme irritation. Rodent experiments have reported that direct skin exposure can cause severe epidermal changes.

That said, toxicologists have consistently approved detergent products containing the surfactant — if the concentration of SLS is low.

“The major human health hazard associated with exposure to SLS is that it can cause irritation to the skin and eyes, the severity of which is concentration-related,” states the U.S. Department of Agriculture. “However, this is a common finding with most detergents and is related to their capacity to disrupt cell membranes.”

Still, if you’re prone to skin irritation and rely on Honest detergent, clarification is needed in this debacle. If the detergent includes SLS, Alba and company should disclose its concentration levels — that would be the honest thing to do.

More like this
Science
Jan. 21, 2023
Can spicy foods cure colds? A neuroscientist reveals the encouraging truth
By Elana Spivack
Mind and Body
Jan. 23, 2023
Cutting back on deli meats may lower your risk of this chronic illness
By Elana Spivack
Science
Jan. 28, 2023
How does the placebo effect take hold? A doctor explains two influential factors
By Kathryn T. Hall. and The Reader
LEARN SOMETHING NEW EVERY DAY.
Related Tags
Share: