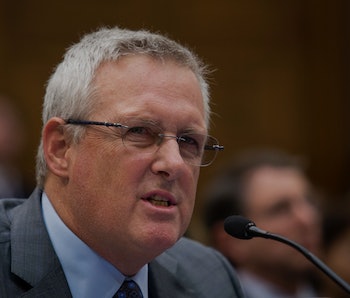 On Thursday, prosecutors filed a new fiery-worded motion in their ongoing legal battle with Apple over an iPhone connected to the San Bernardino shootings. And Apple is having absolutely none of it, slamming the motion as a “cheap shot” that was “intended to smear the other side with false accusations and innuendo.”

Clearly, both sides are tired of playing nice.

Thursday’s motion, which you can read in full came out swinging against Apple, essentially saying that the tech company’s noncompliance with the government’s requests was a slap in the face to American values.

“Apple’s rhetoric is not only false, but also corrosive of the very institutions that are best able to safeguard our liberty and our rights,” the statement reads.

Apple’s general counsel, Bruce Sewell, immediately shot back in an on the record statement, basically giving the legal equivalent of an “Aw, HELL no!” to the prosecutor’s motion.

“In 30 years of practice, I don’t think I’ve ever seen a legal brief that was more intended to smear the other side with false accusations and innuendo, and less intended to focus on the real merits of the case,” Sewell said.

Sewell also pointed out that the latest motion was the first time prosecutors had tried to make the case that Apple “deliberately made changes to block law enforcement requests for access,” an allegation he called “deeply offensive,” “An unsupported, unsubstantiated effort to vilify Apple rather than confront the issues in the case.” While he wasn’t specific, here’s the part that probably got him so riled up:

The prosecution is sticking to the case that unlocking the iPhone in question, a government employee phone provided to the male shooter by the San Bernardino County Department of Health, is an isolated case with a simple technical fix that wouldn’t compromise the security of other phones, or establish precedent that would let the government into other phones. U.S. Attorney General Loretta Lynch said much the same on the Late Show with Stephen Colbert Thursday evening, basically parroting wording from the prosecutor’s motion.

Apple, alongside most of the tech community has directly contradicted this, saying that removing password reset protection could cripple its phones’ security.

You can read Sewell’s full statement over at The Verge — it’s a blistering tirade that deserves to be surrounded in a border of fire emojis, wherein Sewell equates the prosecution to JFK assassination conspiracy theorists and ends the thing with this absolute thunder-punch of indignation:

“Everyone should beware, because it seems like disagreeing with the Department of Justice means you must be evil and anti-American. Nothing could be further from the truth.”