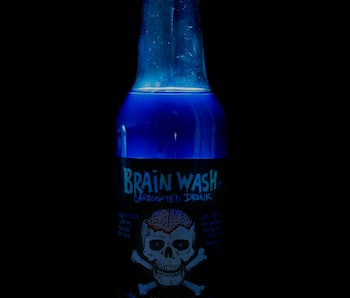 When you start a night of drinking, you probably feel an initial wave of excitement and energy hit as that first glass of beer or shot of liquor goes down. Although alcohol is classified as a depressant, a moderate amount actually serves as more of a pick-me-up than a downer. The reasons why have to do with how the body processes alcohol, but your body’s initial reaction provides a scientifically sound way to start the night right.

First thing’s first, let’s dive into why exactly we call alcohol a downer. According to the classification of drugs used by doctors and scientists, a depressant is any substance that directly affects an inhibitory neurotransmitter called gamma-Aminobutyric acid, or GABA. Alcohol basically mimics GABA’s effect in the brain by binding to the same receptors and inhibiting neuronal signaling. That’s why drinking makes you feel loose, carefree, even pretty.

But this is just part of the overall effect of booze on the body. As blood alcohol content rises, people tend to feel better — not just looser, but also filled with more excitement and energy. Drinkers often report less fatigue and more restlessness. Some researchers have found that drinking actually increases levels of norepinephrine, another transmitter that’s responsible for arousing the nervous system. This would pretty easily explain why someone gets really jazzed about the upcoming night when they first start to imbibe. The former means you When we take that into account, alcohol is more than a depressant — at least when drinking first starts.

This is in addition to simple fact that booze is often filled with sugar and carbs anyways — which helps add to that initial kick. Your body is used to breaking down sugars for energy from almost the moment you ingest them.

More than that, however, it’s also important to remember the other metabolic mechanisms of booze. One of the byproducts of alcohol metabolism is acetate, which is rich in energy and helps keep an individual active. A 2013 study by Yale University researchers found that people who drank about eight drinks per week were able to pull out more energy from acetate than light drinkers. Basically, they had learned to substitute a reliance on sugar for acetate when it came to energy needs.

That might explain why some of your buddies who are used to regularly going out for happy hour seem to better able the shake off the slow-mo effects of alcohol as the night moves forward.

Taken together, what does all this mean? If you’re trying to go out and suck up the most energy out of a few drinks, the first thing you’ll want to keep in mind is to limit yourself to just a few drinks, depending on your personal tolerance. This is probably in the range of one to three drinks. Get buzzed, but stop before you get sloppy. Once you start to notice you’re hitting a lull or you find yourself saying “I need another one”, that’s probably a sign that the energy shock is over and the more overpowering effects of GABA-mediated inhibition.

Second, stick to drinks that are high on sugar — unless you plan to be out late. Stay away from hard liquor and spirits alone. Beer is the best choice, but many people complain its easy to feel bloated and bogged down after several. Wine is a good alternative to avoid that. Mojitos and Mai Tai cocktails are chock full of sugars. And let’s not forget Sangria — the favorite of brunch devotees. Sangria is, biologically speaking, an underrated party drink.

Lastly, as the Yale University researchers found out, you’re in a better state to take advantage of the initial liveliness reeling from the first few drinks if you’re a regular drinker. That’s not exactly a lifestyle everyone is willing to adopt, but if you have can manage a healthy balance (and avoid or ignore the incredibly bad impacts of alcohol on your individual health), more power to you.

Just remember that everyone is different; how you react after a few drinks is not necessarily how someone else will. Perhaps you don’t have actually feel a wave of activity fill you once you’ve finished your first beer. Maybe you get tired no matter what. That’s totally fine and normal — it just means you’ve got to maintain a decent Uber rating.

More like this
Mind and Body
Jan. 24, 2023
Is alcohol bad for your health? Here's what the science actually says
By Katie MacBride
Science
Jan. 28, 2023
How does the placebo effect take hold? A doctor explains two influential factors
By Kathryn T. Hall. and The Reader
Mind and Body
Feb. 1, 2023
Why the future of periods could be none at all
By Elana Spivack
LEARN SOMETHING NEW EVERY DAY.
Related Tags
Share: