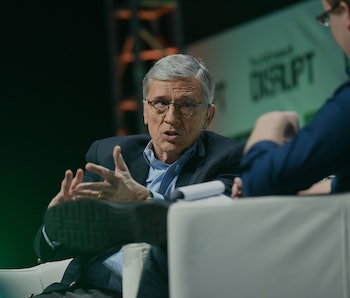 When the Federal Communications Commission first introduced one of the organization’s largest programs, Lifeline, in 1985, it was meant to give low-income families access to landline phones. But, you can’t listen to this article through a home phone, and kids don’t research for school projects by reading an encyclopedia in the public library anymore — they use the internet.

Lifeline already provides voice and data packages for qualifying mobile phone users, but this would expand the service to include broadband internet at the low cost of $9.25 a month to eligible participants.

The proposal is currently being circulated for consideration among the full Commission and will be voted on during the March 31 open meeting.

Wheeler is pitching the proposed plan to the public as well, with a blog post penned conjointly with Commissioner Mignon Clyburn detailing the need for an increased budget to make this expansion work.

Growing from a $1.5 billion budget to $2.25 billion will allow the FCC to service an additional 5 million households in need of internet access.

Wheeler writes that cost remains the biggest barrier to broadband internet access, with 43 percent of people who don’t subscribe citing affordability as the reason. However, rural communities that currently lack the infrastructure to deliver broadband speeds are also disproportionately affected, as less than half of adults living in rural areas have access, according to ruralstrategies.org.

Matching President Barack Obama’s recent attitude, Wheeler has not been shy about going after large internet service providers, cable companies, and generally standing up for the most disadvantaged. Nearly a year ago, he headed up the fight to protect net neutrality by applying Title II of the Communications Act to the internet, and earlier this year he proposed a plan to increase competition among set-top box cable providers.

A New York Times story published in February went up-close with families the school districts serve to show the challenge that comes with not having internet access in a world where it increasingly feels required, especially for homework.

“This is what I call the homework gap, and it is the cruelest part of the digital divide,” Jessica Rosenworcel, a Democratic member of the FCC who has pushed to overhaul the Lifeline program, told the Times*.

This $9.25-per-month plan is arguably the most involved proposal yet, as it requires the FCC to actually apply some implementation, not just change a rule and see where the cards fall. The commission will have to sign people up, inform them about the program, and work with ISPs to deliver the service if it passes. But a commission tasked with “ensuring all Americans have access to advanced telecommunications and information systems,” can’t possibly ignore broadband access any longer.