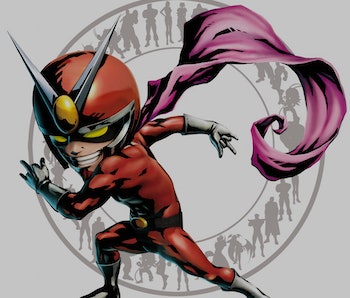 He runs across the screen in a blur. He’s cocky, snarky, and dressed in a vibrant red unitard. He is … not The Flash from DC Comics, but the video game superhero Viewtiful Joe, from game director Hideki Kamiya and publisher Capcom. With the abilities to slow down time, Matrix-style and speed up just like The Flash, the two primary Viewtiful Joe games demonstrated the flawless formula for how any game based on The Flash should aspire to be.

A pair of side-scrolling beat-‘em-ups, Viewtiful Joe and Viewtiful Joe 2 were some of the best experiments with “bullet time” mechanics that gaming was obsessed with at the time: like in the gritty shooter Max Payne and the hack-and-slasher Prince of Persia. But Viewtiful Joe distilled it to arcade simplicity.

Slowing down allowed players to indulge in the action, while going super fast let them clear out enemies like a mega ninja in seconds. It gave the player that elusive, super-powered escapism few games actually achieve, and that’s in spite of its highly stylized cartoon aesthetic.

Viewtiful Joe’s power was manipulating “the film world” he was sucked into. His slow-down superpower was a direct nod to The Matrix and his speed was like someone hit the fast-forward button. That’s not The Flash, whose power is simply “I can go fast as hell.” But, the groundwork is there.

The Flash has been in video games before, but the closest one that came to capturing his essence was scrapped. His first one was on the Nintendo Game Boy and it kinda sucked.

But he’s been in pretty good games, too — just as a martial artist for some reason. He was in the Mortal Kombat crossover game, DC Universe vs. Mortal Kombat, which was laughably mediocre, and then later, Injustice: Gods Among Us, which was seriously sweet.

In 2008, Bottlerocket Entertainment was developing The Flash: The Fastest Man Alive, an open-world game that would have hit consoles if publisher Brash didn’t fold. The remaining work shows Flash running aimlessly around a hardly-defined Central City, but maybe the final product would have looked really good.

But now, imagine a theoretical game starring Flash but in a shape similar to Viewtiful Joe: As gamers control Barry Allen, pressing the right trigger gets him to run at his maxiumum super speed. But pressing the left trigger simultaneously allows them to sloooooooooow down and sucker punch a bad guy, or catch arrows like in this season’s Arrow and The Flash crossover.

Movie and TV games are passé now and the cheaper, ubiquitous smartphone app — compared to a full-fledged $60 game — is the preferred platform for marketing tie-ins.

But if Warner Bros. were daring, or smart, they would capitalize on the monster success of its The Flash TV show with a medium-sized, stylized video game that plays like Viewtiful Joe, which spelled out its winning formula more than a decade ago. They just need their own guy in red spandex.