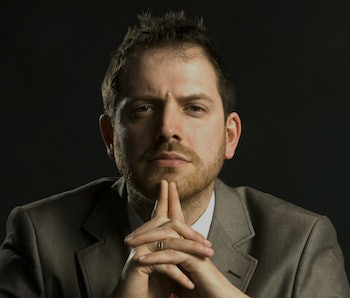 Joe Abercrombie is the Locus Award-winning and New York Times-bestselling author of the First Law series and the Shattered Sea trilogy. He builds vivid worlds of snarky language, and his epic, gritty, and immersive fantasy has drawn deserved comparisons to George R.R. Martin’s work. Inverse spoke with him about why Gandalf never worries about paying for things, how the industrial revolution changed fiction, and pirates.

How do you approach world-building? Since you’ve written both adult and YA novels, is there a difference in your method of approaching each one?

I’ve built two worlds, one for my adult books and one for my young adult books. The approach was very different with each. In the case of the adult books, it was a world I’d been developing and thinking about for years — some of the ideas went right back to childhood. It was also a world which was very intentionally “classic” epic fantasy in many ways, because I wanted to write my own take on classic epic fantasy. So it had to have many of those things you expect in an epic fantasy: Magic towers, noble kingdoms beset by impossible odds, beautiful walled cities against the sparkling sea. It was a world that really developed and matured over a very long period, and in a way when I wanted to start writing the world was already, at least in part, “there.”

For my YA books, the approach was very different, as it was a world that I really developed purely to tell that story. Character, plot and world really grew up together very quickly to compliment each other. I started with the idea of a young prince born with a withered hand, who’s unable to really fit into the very male warrior role that society expects from him. So I needed a warrior culture, and in particular a culture based around a shield wall — since his inability to hold a shield would be crucial in his failure to measure up. That suggested a viking style of world, vikings being something I’d always been quite interested in.

Then, since the central character is one who goes on a voyage of discovery, it suggested a voyage around a circular sea, so I ended up with an enclosed sea like the Baltic, which obviously was the centre of the viking world. Then a state of constant warfare with a neighboring kingdom would add extra pressure to this character’s inability to fight, so I quickly ended up with the situation of two feuding kingdoms on the shore of a baltic-like enclosed sea.

In general, my feeling about the fantasy I read growing up was that the focus was often on setting as opposed to character — on those things that separate fantasy from every other type of fiction. The world building, the languages, the magic, the fantastical creatures. And I really wanted to concentrate on the people as much as possible and keep the setting in the background. So the kind of world building I tend to concentrate on is more the internal kind. The cultural things that influence the way the characters think and behave. I want the world to feel real, to fell convincing, but I don’t want it to overpower the action.

Where do you draw inspiration from? What are some of your own favorite books or TV shows?

I think you draw inspiration from anything you read, watch, play, experience and really like or dislike. It all goes into the soup in your head from which your own work gets distilled. The fantasy that I found inspiring when I was a kid is still very much the stuff that inspires me now. Tolkien, LeGuin, Moorcock, and later George R.R. Martin, as well as a whole load of RPG supplements and other books. But I’ve always read all kinds of stuff, so I’m just as much inspired by Dickens, Tolstoy, Elmore Leonard, James Elroy, Larry McMurtry and all kinds of other writers.

These days it’s mostly non-fiction that I read, but TV drama has got better and better of late and I find there’s a great deal of inspiration to be found there. It’s Vikings, Suits, and Black Sails that I’m currently enjoying.

We’re pretty fond of Black Sails around here too! Who’s your favorite character?

I wasn’t entirely sure about the first season, but it’s improved hugely and I thought the second season was cracking. Very much enjoying it now. Rather randomly I’ve been exchanging the odd message with Luke Arnold, who plays John Silver, as he’d been given the First Law as a portrayal of someone dealing with crippling injuries and chronic pain. I like a lot the way his character has gone from being charming slime to one of the more courageous and principled of the cast.

What’s fascinated you recently — whether it’s something you’ve read or a new piece of information you’ve learned?

I’ve been reading a lot about the industrial revolution for my latest book, so I’m currently quite fascinated by how coal transformed British society and paved the way for industrialization and the arrival of modernity. I’ve always been interested in economics, progress, politics, and try to bring those things into my fantasy as I think they’re often a little overlooked in the genre. Gandalf never worries much about how he’s going to pay for things.

Where do you see the future of the fantasy genre going?

The future of anything is notoriously difficult to predict. No one ever really sees the big phenomenon books coming that send things spinning off in a new direction — Harry Potter, The Hunger Games, Fifty Shades of Grey, etc. I try not to worry too much about it. I think as a writer, you have to concentrate on what interests you, what makes your next book good, and let the market do its own thing.

My own area of epic fantasy has long been well established, I guess, and over the last ten or twenty years it’s definitely become a bit more varied, drawing in some sword and sorcery influences, getting grittier and a bit more diverse in its settings and characters. Obviously the success of Game of Thrones has brought in a lot of new readers. I very much hope that continues.

What’s next for you? What are you currently working on and what are you most excited about?

I’ve got a collection of all my short stories out in April. 13 stories all set in the First Law world, some of which are entirely new, several of which haven’t been widely available before, and pretty much all of which feature some familiar characters from the First Law books in one role or another. Then I’m working on a new trilogy in that world that takes place maybe thirty years after the First Law, so a whole new central cast. Although there are many old friends in the background, and a world that has changed and developed considerably.