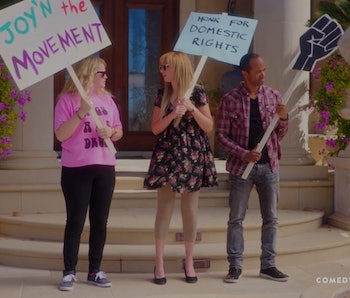 Over the course of Comedy Central’s new Idiotsitter, the dynamic between Gene and Billie has evolved in unexpected ways. In the first episode, it seemed as though the series would push Gene and Billie’s relationship forward by exploiting the discrepancy in their intelligence — Gene is deeply immature and dumb, while Billie is an intellectual and Harvard grad. But eight episodes in, Billie gradually stoops to Gene’s level: She shows up drunk to Gene’s best friend’s funeral, she pettily competes with Gene for Channing Tatum, and experiences a fumigation-induced hallucination. Rather than overplaying the obvious differences in Gene and Billie’s personalities, the show has opted for a more interesting dynamic: the overlap between them. That said, in last night’s episode, “Viva La Joy,” Billie officially became the bigger idiot.

When Joy, the maid at Gene’s mansion, is fired for politely requesting a raise from Gene’s father, the friends resolve to get her back. Billie — as the more intellectual one — views the termination as an issue of class struggle and the right to a fair wage. Gene joins in because she misses Joy’s superior sandwiches. Billie decides that a peaceful hunger strike is the only way, so she invites a gaggle of hippies to Gene’s front lawn to feebly protest Joy’s dismissal.

This hippie convention is a hilarious jab at white, self-important activism: None of the hippies know what they’re protesting, yet they bring drug rugs and Lennon shades to support the cause anyway, whatever it may be. Even the dim-witted Gene understands these protesters are just posers who “smell like B.O. and cashews.” Even the organizer, Billie, can’t lead her own protest — she passes out from hunger before anything major happens.

In last night’s episode, Billie wants to help, but is blinded by her own privilege; she tries to assuage her guilt by announcing, “Look, I’m trying to help!” While the protest is unfolding, Gene’s father hires another maid to fill in for Joy, and Billie sees this as a blow to her cause. In a terribly self-aggrandizing way, she approaches the new maid and kindly asks if she’ll quit, so that the protest outside can proceed. This is the first — but not the last — time someone dubs Billie a “white puta” in the episode. Gene may not be doing much, but her minimal participation in the strike (she keeps pulling slices of pizza out of her pants) is genuine, at least.

Billie’s official transition to the bigger idiot comes at the very end of the episode, during a fancy dinner Gene’s father hosts for his business partners. Completely delusional from hunger, Billie is led to believe that Gene hid a bomb in the turkey. In a desperate attempt to save the dinner guests from an impending explosion, Billie jumps on the table and begins to ravenously stuff the turkey into her mouth, digging for the bomb she thinks Gene has planted. Billie soon realizes that she imagined the whole bomb scenario — and devoured the entire turkey meant for the guests. Gene reminds Billie that the “radical” plan they had hatched was not to blow everyone up, but to have Joy secretly cook the dinner so Gene’s father could remember how exceptional her cooking is. Great idea, Gene. Billie, what’s your deal? Talk about misguided activism.

More like this
Science
Jan. 22, 2023
Supermassive black holes may be bigger and more powerful than we previously knew
By Jeff Nagle
Entertainment
18 hours ago
How The Last of Us Episode 4’s Ending Sets Up a Tragic Subplot — With a Twist
By Dais Johnston
Entertainment
9 hours ago
The Last of Us Episode 4 Delivers the One Thing Missing From the Show
By Alex Welch
LEARN SOMETHING NEW EVERY DAY.
Share: