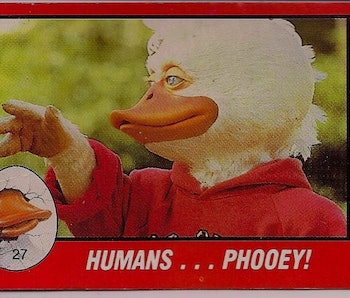 It starts with a saxophone, a pan over a dirty apartment with LPs in the cabinet, a fridge full of Budweisers. But this isn’t The Long Goodbye, by any stretch of the imagination. The movie posters (“Breeders of the Lost Stork,” “Splashdance,” and so on) on the wall indicate that this is an alternative universe populated by anthropomorphic ducks. It’s Duckworld, home planet of Howard the Duck, a low-brow Dashiell Hammett discard with white feathers and a black sense of humor. In 1986, this character, the brain child of Marvel writer Steve Gerber, arrived in cinemas, forcing America to ask one simple question: “What the fuck?”

Unlike Deadpool, Marvel’s current attempt at R-rated weirdness, the film was not an exercise in fan service. No one really wanted it except George Lucas, who took a hiatus from Lucasfilm to produce it. What he ended up producing was a film that stood well apart from the tone and themes of the comic books. In the hands of Lucas buddies Gloria Katz and Willard Huyck, Howard’s story became an alien-come-to-Earth, special-effects-laden situational comedy and slapstick-y action film. Its innuendo-filled banter and near duck-on-human sex effectively rendered the film an easy fit for exactly no demographic.

Some 30 years later, Tim Miller’s adaptation of Deadpool has broken non-Star Wars, non-PG-13 box offices records; the film brought in around $150 million across its opening three-day weekend. Deadpool is similar to Howard the Duck in that filmgoers get something more openly puerile and ridiculous than a normal comic book movie. But Deadpool clearly points in the direction of action flicks with a more adult bent, with some Family Guy-like humor added in; it’s not Captain America, but it’s nothing too outlandish. What Deadpool doesn’t or won’t do that Howard the Duck does, is remain actually shocking.

What’s more jaw dropping: seeing Ryan Reynolds’ ass or watching animatronic feathers stand up on a child-in-a-duck-suit’s head to signify arousal? Howard the Duck, on re-watch, is still outright disturbing. At one point, Howard, filthy in a torn tweed suit, performs “Quack-Fu” to swat off a couple of punks who are about to casually rape Lea Thompson. There’s a duck costume with the human-shaped breasts. Howard scratches his crotch with the butt end of his cigar and, at one point, blurts out “Yeah, I’ll put you on a pole!”

Sure, Howard the Duck has 1/50 of the dick jokes of Deadpool, but somehow, the one or two in Howard speak volumes. Remember when a dick joke really used to mean something?

Howard the Duck was the first feature-film adaptation of a Marvel comic, and remains its most radical. In a generation when comic book films have become relatively safe — steeped in fan service and recognizable act structures — Howard is the polar opposite. The Willard Huyck-directed film flew in the face of the comics, exploring its own seedy universe: part Dinosaurs, part Fritz the Cat, and with its odd, Thomas Dolby-penned punk-funk musical sequences, part Purple Rain. The movie lacks logical pacing, transforming into a madcap action film for its last 45 minutes. The unlikely culmination? A truly horrifying-looking Jeffrey Jones — who is, as always, show-stopping — as a scientist possessed by a croaking alien presence shooting fire and blue lightning out of his eyes. Howard the Duck — which ultimately kind of stops being about Howard at all — is everything today’s comic book movies aren’t.

This is part of why it remains such an enjoyable cult film. Unlike many movies of this general stripe, however, Howard the Duck really doesn’t bring back clear memories of the cultural landscape of another time. Just as Howard himself comes from a bizarro duck-populated world exactly like our own, Howard the Duck seems to come from some parallel version of American culture that never existed. It makes no sense in any context.

Marvel has discussed turning the comics into another film, and indeed, a Seth Green-rendered Howard (God help us) cropped up briefly in Guardians of the Galaxy. Yet it is still indefinite and long in the future. In 2014, Guardians director James Gunn told Empire: “It’s possible Howard could reappear as more of a character in the Marvel universe. But if people think that’s going to lead to a Howard the Duck movie, that’s probably not going to happen in the next four years. Who knows after that?”

We’ll see if they’re man enough. 30 years later, fear of revisiting Howard’s dark and twisted reality looms large: also, perhaps a pensiveness about revisiting a character who clearly inspired Lucas toward the even-more-fearsome, computerized creature work he did in the Star Wars prequels. One wonders if Jar Jar would have been so obnoxiously rendered if Lucas hadn’t put his full team behind making Howard so ghastly. If a universe without Howard the Duck existed, would George Lucas be the pariah he is today? Would anything be the same at all? That’s a question for another day, or Howard the Duck II.