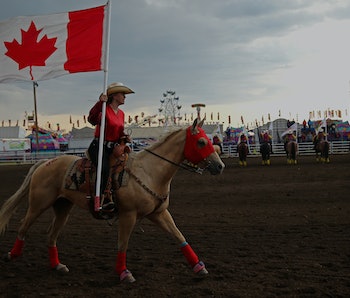 There’s nothing more American than being prepared, and if Donald Trump manages to win the Presidency, you should know your options for taking an extended vacation to the great white North.

While we wouldn’t necessarily advocate abandoning the United States entirely, there are some options for weathering the Trumpocalypse in the warm, flannel-clad arms of our Canadian neighbors. Sure, most polls predict Hillary Clinton will win the election on November 8, but there’s always a chance that [Trump’s America may come to be](https://www.inverse.com/article/10375-make-america-hate-again-we-re-a-year-from-president-donald-trump. Unfortunately, this year’s third party candidates don’t look so great either.

The United States passport is one of the best in the world to travel with, but emigrating to another country still isn’t easy. Fortunately, America and Canada have a strong diplomatic relationship, and there are plenty of options for people who want to establish residency north of the border — especially if you’re a student.

Here are the three easiest ways to move to Canada to avoid Donald Trump.

For younger Drumpf refugees, going to college might be your best bet for a four- (or heaven forbid, eight) year period of asylum in Canada. It has some of the best universities in the world, and once you’re accepted into one of the government’s designated learning institutions you can apply for a Canadian student visa, which will let you live, and even work part time, for the duration that you’re a student. Tuition fees average around $6,000 per year, which is a solid $3,000 less than the U.S. average, even for in-state students at public universities. You may even be eligible for a post-graduation work permit, which would let you stick around longer and potentially even qualify you for express entry as a Canadian permanent resident. Congratulations, now you live in Canada!

For non-students, immigrating to Canada is a bit more difficult. There are several pathways to legal residency that you can take, including the aforementioned express entry as a skilled worker, which is probably your best bet. For that, you’ll need an official job offer from a Canadian employer in addition to your application for express entry. Once you have a job, enjoy the mandated maternity leave, cheaper healthcare, and other benefits of living in Canada. Living expenses, like housing and food, are often slightly higher than averages in the States, but what you pay in increased prices you make up for in state benefits.

Once you know you’re set to move, you’ll need a place to live. If you’re choosing with your wallet, check out this comprehensive list of the best places to live in a variety of different categories. Boucherville, Quebec, a suburb of Montreal, tops the list, but you might want to brush up on your French before moving there.

If the suburbs aren’t your thing, Vancouver, Toronto, and Ottawa are all in the top 20 “most livable” cities in the world, according to Mercer’s Quality of Life Rankings in 2016.

Canada is, for Americans, one of the easiest countries to emigrate to, and the benefits are pretty great. Canada is a land of opportunity — sure, its currency is sinking, but its most recent elections went wonderfully for the liberal side of things, giving the tough-on-refugees and immigration Stephen Harper the boot and installing climate and culturally-conscious Justin Trudeau as prime minister.

Oh, and you’ll be able to stream Star Wars: The Force Awakens on Netflix. Rest assured, there’s always hope north of the border, even if the darkest, Trumpiest, timeline comes true.

More like this
Gaming
6.23.2022 12:30 PM
Known gamer Ted Cruz would love these 6 pay-to-win games
By Willa Rowe
Culture
2 hours ago
8 Norse gods you need to know before Thor: Love and Thunder
By Robin Bea
Culture
1 hour ago
64 years ago, Hollywood made the most rip-roaring Viking movie ever
By Emil Stern
Related Tags
Share: