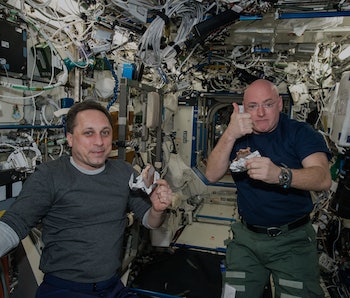 Space does crazy things to your body. After spending almost a year in space, astronaut Scott Kelly returned to Earth on Tuesday night two inches taller than when he left.

In space, the near-absence of gravity causes astronauts’ spines to stretch, sometimes as much as three percent. The vertebra in their backs expand and relax without gravity constantly pushing them together. Kelly’s height-boost will be short lived, as most astronauts return to their original height after a few months. In 2013, Space.com reported that astronauts started using a new ultrasound machine to carefully measure the changes to their spines after certain intervals, and Kelly’s measurements may be particularly valuable after his unprecedented time in space.

Micro-gravity environments like the International Space Station have a laundry-list of effects on the human body — some of which we still don’t fully understand — which will be major factors in future manned missions to Mars. Micro-gravity can effect bone density, immune systems, vision, muscle composition, and more during long periods of exposure.

Kelly’s brother, astronaut Mark Kelly, is also a vital part of the process. Mark, Kelly’s twin, has spent significantly less time in space than his brother, so he’s a perfect control group for studying the effects of long-term spaceflight.

Now that Scott Kelly is home, NASA’s scientists will run exhaustive tests to compare the two brothers’ bodies and minds after their journeys through the stars.

More like this
Science
Feb. 1, 2023
65 Years Ago, America Launched Its Most Pivotal Space Mission Ever
By Jon Kelvey
Science
8 hours ago
Exclusive: NASA Explains How the Voyager Missions Could Live Until 2035
By Kiona Smith
Science
Jan. 29, 2023
NASA-funded study to research if bacteria could help form building materials on Mars
By Matt Williams and Universe Today
LEARN SOMETHING NEW EVERY DAY.
Related Tags
Share: