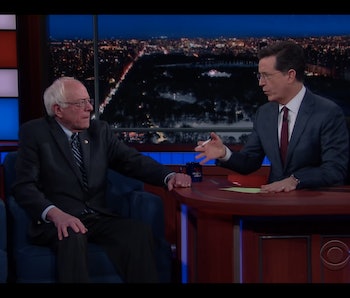 Here’s a question for our time, and one with no single good answer: What even is Reddit? With the dispassionate, explanatory tone of a high school science book, the authors of a new Pew study lay out in plain language how and why Reddit works, particularly with respect to how it propagates political news items and their ensuing discussion. The “Understanding Reddit” portion of the study breaks down the basic mechanics of the site: People “upvote” what they think others want to see and “downvote” the stuff that’s best left at the bottom of a page. It’s a simple, empathetic model that works at least as well for news about the 2016 presidential election as it does for funny memes and nature snapshots.

The authors of the study found that those who browse Reddit specifically looking for news are “more likely to be male, young, and digital in their news preferences,” a phrase that perhaps simultaneously describes a typical Bernie Sanders voter. It ought to be no surprise that the Sanders campaign has an official and substantial Reddit following at the r/SandersForPresident subreddit. Pew’s statistical analysis of more than 1 billion Reddit comments showed that Sanders was by far the most frequently mentioned political candidate on the site, across sections. What is it about Sanders that gives him so much traction in this particular corner of the internet?

“Reddit has been known as one of those ‘goof-around’ sites, and it caters to many NSFW subreddits. But after what we have accomplished, that is a dead idea,” David Fredrick tells Inverse; he’s the co-founder of the grassroots Sanders for President organization, which maintains the official Sanders subreddit. “This is the new model for support. If you cannot get traction or gain appeal through online application, you are dead in the water or falling behind. And I mean true traction. Trolls and shills are flushed out with alarming speed. Fact-checking and informational counter-punching are almost immediate if you have a truly activated base.”

Publicly viewable statistics on a subreddit’s subscribed readership underscore Fredrick’s argument that the Sanders campaign is the most Reddit-savvy. At the time of this writing, the Ted Cruz subreddit shows a little over 1,200 subscribers. Hillary Clinton’s campaign has just north of 5,000. Sanders is rocking more than 194,000 subscribers.

And what of the intersection between the social news sharing site and iconoclast candidate Donald Trump? Pew’s further quantified look at Reddit comments yielded the finding that growth in conversation about Donald Trump spread faster than the growth of conversation about the election in general, like a lightning rod attracting lightning. Just as no one knows quite what to make of Trump’s run, there is debate over which of two Trump subreddits is “the official” one. Is it r/DonaldTrump, or r/The_Donald? (The pages boast 1,168 and 37,434 subscribers, respectively.)

When asked about the difference between other candidates’ subreddits and the Sanders subreddit, Fredrick says that the major difference lies in that the Sanders camp “[takes itself] much more seriously. This isn’t a game to us, or a hobby. We are the far-and-away leaders and have publicly maintained that growth by remaining mostly inclusive and typically constructive.”

Reddit is easily likened to a libertarian idea-sharing platform, with people collectively working together in such a way that the friction in determining which idea is “best” at any given time is made invisible. It’s a system that also happens to work well in determining top news stories of the week. Yet out of all the presidential candidates putting forth the best media hustle they can to win your vote, only one is doing so to meaningful ends on Reddit. Doesn’t it behoove the rest of politics at large to figure out some way to leverage that platform? Fredrick thinks so.

“Political activism and constructive discussion is beyond simply pushing a message and waiting for responses,” he says. “The establishment will live on, but it will have to try a lot harder to make sure it can approach topics with a great deal more detail and honesty than it has in the recent past.”