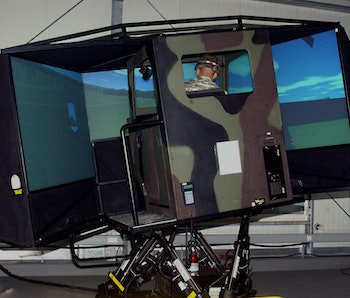 There are an increasing number of games that accurately simulate actual behaviors. Studies show that games that, for instance, have players virtually putting using their bodies make them better at golf. This trend won’t be reversed as sensor tech improves, and VR tech is becoming more overwhelming. Should we differentiate these games from traditional video games? Should we call them something else?

Consider the ground zero of simulator discussion: flight sims. This became a hot button issue post 9/11, and since then a weird division has emerged where lots of devs in that space stopped making accessible flight sim software and those still in the field have doubled down on the professional eye teaching and the budget level of the end product. As someone who grew up on multiple releases of Microsoft Flight Simulator, something like this seems insane:

That’s teaching a skill set and a muscle memory for running a plane, or even a specific United plane. Is this really a video game anymore? We can debate the “gamic” elements of anything, but this has a practical use and purpose, and that’s making for something more complex. And it isn’t the only simulator that is evolving. Consider FitBits. Or iWatches. There are apps and games and tools associated with these. If you are gamifying training, that’s one thing. But if you’re training with a goal in mind and software backup, is that moving into a new category?

In our interview with a game ethicist Prof. Robert Sparrow has this to say:

“There’s a real and basic sense that the games can teach skills because you get better at the games. Can you take that same skill and apply it to a real world activity and get the same increase in performance? If you were training manual dexterity and had the right controller you could get this out of Mario Brothers— but you might not able to be to transform into a great violinist or surgeon just from proper button mapping.”

This isn’t our only example of the complicated ethics of modern gaming and certainly tech isn’t slowing down. Even games themselves are moving into a level of interactivity that I can see as no longer disconnected entertainment. Here’s one I genuinely fear because I’m not in shape enough to deal with this:

I always thought “wow it would be cool to walk in these worlds,” but as someone who has played 24 hour bursts of Fallout 3, I cannot imagine how quickly the human body breaks down from that level of running; normally an action associated with holding a button down (which I don’t even like that much.)

So there are military and professional and health extensions on simulator technology, and they’re already a part of our homes and personal life. Are simulators still video games? Are video games outgrowing their generalized nature? Yes to all of this. It is time to start exploring new titles for the genres of media based on the interactivity and the level of effort and technical knowledge required of the participant, and what it means to interact on these heightened levels. Because that caries with it more responsibility. Will we need to start overseeing simulator content to make sure it is being handled responsibly? Absolutely. There’s a lot to fear here in terms of bad programming teaching a pilot incorrect muscle memory or teaching someone to run in a poor technique or accidentally making violence too accessible or second-nature. Are these new simulator terms going to bring back a lot of the fearmongering arguments from games in the 90s? That seems unavoidable.