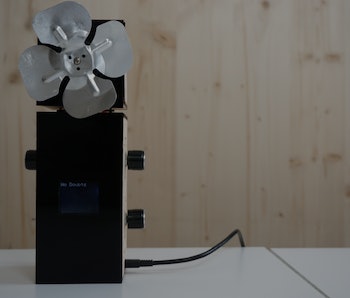 Your smartphone isn’t what it purports to be. If it was actually “smart” or “your” phone in any active way, it wouldn’t let you send ill-advised texts to you ex-girlfriends or order buffalo wings off Seamless after Googling “Zantac” the previous evening. The phone would do more than make inputs into outputs: It would mediate and make decisions and, in so doing, be forced to demonstrate its own morality.

If that sounds frustrating, don't worry: We don’t have the tech. But we do have a way to simulate that sort of intelligence in order to get a sense of what the Internet of Things will be like when “smart” becomes more than branding lingo. Consider for the moment what a fan that hates fat people can tell us a lot about how our morality will inform — and not inform — the morality of our devices.

Would the opinions of such a fan reflect poorly on its owner?

Built by Ethical Things, a collaboration between Simone Rebaudengo and Matthieu Cherubini, the fan is both a literal fan — it’s got blades and everything — and a successful design project (Core 77 Speculative Prize!) built to give users a sense of a future in which UX is a give and take proposition. Rather than creating a J.A.R.V.I.S.-style hub brain, Rebaudengo and Cherubini hooked their fan up to Rapid Workers, a sort of computer serf agency, and let its workers make decisions about the nature of, well, fandom.

For instance, the fan was asked if it should prioritize cooling a sweaty fat person or a non-sweaty thin person if they sat in a room together. The answers, many of them pinged over from Nepal, were varied, but also explained in logically consistent terms. In other words, the fan became effectively smart enough to jam a justification between the input and the output. That means that the fan was (with some human assistance we’ll politely ignore) behaving within an ethical framework and also that the fan could be a real asshole.

When true smart devices finally do arrive, we’re going to want to be able to adjust their settings so that they don’t contradict our own morality (or lack thereof). The last thing we need is to have our appliances body shaming our houseguests.

Seeing the need for their fan to become morally adjustable, Rebaudengo and Cherubini built in a settings panel allowing users to specify their religious and education background. This way, a Buddhist fan owner with a Masters degree gets to own a well-educated Buddhist fan. Conversely, an atheistic middle school dropout can have a fan that gets his struggle — or, and this is a major or, a fan that doesn’t share his worldview. This last option illustrates the potential political diversity of appliances. (Here’s hoping that last sentence was as fun to read as it was to write.)

That sounds pretty insane and, in point of fact, having a bunch of devices starring in their own morality plays would devolve in Jetsons-level slapstick pretty quickly, which is why consumers will likely want to maintain similar ethics settings on their future smart devices. What does that setting represent? Something fundamental about the user. Settings could be aspirational (“The good of the group comes first!”), realistic (“The good of the group comes a close second,” or indicative of a poisonous mindset (“Fat people come last”). Whatever people choose, the choice will represent a long look in the mirror.

In the future, if your fan is an asshole, you’ll have no one but yourself to blame.

More like this
Science
8.10.2022 7:15 PM
Beware! Dramatic image of spiral galaxies previews the future fate of the Milky Way
By Kiona Smith
Science
8.5.2022 6:00 PM
How is nature connected to well-being? It's complicated, scientists say
By Tara Yarlagadda
Science
10 hours ago
A new plasma-based technology could be crucial for living on Mars
By Doris Elín Urrutia
Share: