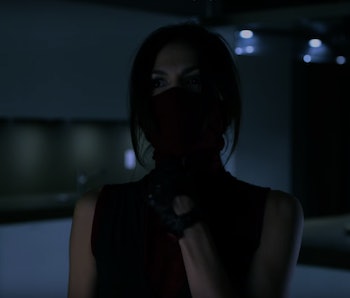 In a new trailer for Season 2 of Marvel’s Daredevil — which premieres on Netflix, March 18 — Elektra takes center stage as the chief focus. She’s come to Hell’s Kitchen for help against the Hand, the ninja clan Matt assumed he eliminated last season with his victory over Nobu. Well, Matt didn’t do a clean sweep it seems, because they’ve only been in hiding.

When the last trailer for Daredevil hit, I wondered why there would be a need for a “Part 2,” but now I know. Season 2 will be juggling two different plots — the Punisher, and Elektra and the Hand — and will both serve to advance Matt Murdock’s character.

The Punisher is a physical manifestation of Murdock’s internal guilt, a living warning not to take his vigilantism too far and to stick to his ideals for guidance. Elektra and the Hand will likely be the external forces, something to confront when Murdock “levels up” after dealing with the Punisher. Or maybe he’ll team up with Frank Castle (but I doubt that).

Daredevil returns to Netflix on March 18.