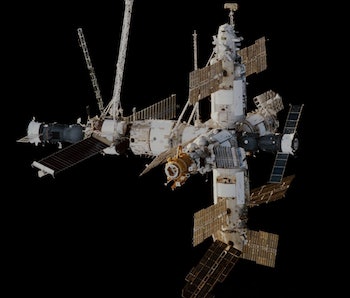 Who would have thought a cramped space station launched in 1986, loaded up with two cosmonauts would have outlasted the Soviet Union? On February 20 of that year, a machine that looks like WALL-E mated with a bug from outer space, the Mir space station, left the atmosphere where it remained in orbit until 2001. Though nowadays, cosmonauts work alongside astronauts on the International Space Station, that’s something no one would have envisioned when the complicated Mir made its way into space.

It survived fires and times of spiraling out of control but also illuminated much about space travel. The Mir station’s time out of the atmosphere included being home to the first wheat crop grown from seed in outer space. It traveled at 17,885 miles per hour and orbited about 250 miles above the Earth. It was both a hot mess and a place 104 space people made their home, off and on, for 15 years.

NASA notes that of the etymology of the vessel was a pretty sweet one. “Mir” means “world,” “peace,” and “village.” “Historically, after the Edict of Emancipation in 1861, the word ‘mir’ referred to a Russian peasant community that owned its own land. A system of state-owned collective farms replaced the mir after the Russian revolution of 1917.”

By the time Americans made their way to the vessel, astronaut Mike Foale said it looked “a bit like a frat house, but more organized and better looked after.” There was trash floating around in the cabin. But it also set “every record in long-duration spaceflight,” according to NASA. This included a space endurance record for a woman, Shannon Lucid, and another early ridiculously long space stay — a continuous 437 days, 17 hours, and 38 minutes for physician Valeri Polyakov. He learned a lot about the effects spaceflight has on humans — something continued by Scott Kelly and crew.

So, it had its ups and downs. Who hasn’t? Varied complications aside, the Mir was an innovative machine, a home, a place that maintained its presence during very strange political times. Every time we retweet something from NASA, we can remember the advancements the Mir made 15 years back.