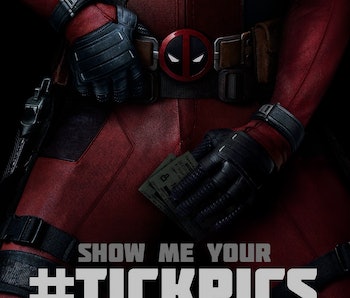 It’s fine that Ryan Reynolds’ provocative, incendiary comedy is revolutionizing the superhero movie game. Even if you don’t think the movie is very funny or even good, perhaps you can concede that superhero movies have been hitting a bloated, formulaic rut in recent years. Deadpool, for better or worse, provided something of an antidote. Fans rejoiced, and Deadpool had an unbelievable and unprecedented opening weekend to the tune of over $130 million dollars.

But Deadpool shaking things up in the comic-book cinema realm does not mean that it makes sense for him to peddle his one-liners and dick jokes everywhere. The logic that Deadpool is best left as king of his own kingdom didn’t occur to over 13,000 fans who signed a petition for the scarred and crass funnyman to be booked as a host for Saturday Night Live. This is probably because neither the petitioner Andrew Stege, nor the group of fans, seem to like or know much about Saturday Night Live.

“How would this not be hilarious having Deadpool in sketches, breaking the 4th wall, and inserting some of his brand of humor (obviously toned down a bit for network television)!?!?! I have not watched a full episode of SNL in years because I just haven’t been able to stomach an entire episode, but having Deadpool host, star, and be all over the episode would get the DVR set so I can watch it again and again!!!”

One might think this was a joke, but the petition has nearly fulfilled its desired quota. The comments section really gives some dark insight into what a cross-section of diehard Deadpool fans think it would be funny for Deadpool to do on SNL, and — just in general — what they think is funny.

Yes, this all would be pretty sick … on Opposite Day. These fellas (they are mostly fellas) just want more Deadpool, and think that of all the many meme-dominating, iconic comic characters in cinema history — from, say, Steve Urkel to Dr. Evil — Deadpool is the one to rule them all. This Ryan Reynolds-realized character can break the generally accepted rule that non-fictional characters host the NBC late-night show, and that they are there to play odd characters, not insert their own pre-existing one in to dominate the whole broadcast.

Is nothing sacred to these people? Stege writes:

Man, Lorne, you better watch out for this Bolshevik revolution of comedic experts; their ranks are strong.