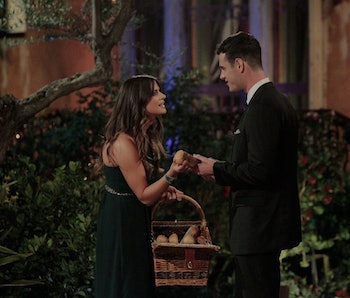 If you’re going to successfully watch reality television, you need to suspend the voice in your head that’s telling you what you’re watching is hurtful garbage. If you can’t move past the absence of morality, the attention-grabbing stunts, the portrayal of certain characters as evil and others as saintly, you’re not likely to enjoy a single bit of what you’re watching. In that way, watching reality television is an exercise in training yourself to shut off your moral compass for the sake of sheer entertainment.

Over 14 years and 20 seasons, The Bachelor has remained at or near the top of the reality TV pyramid, the pinnacle of can’t-look-away reality TV. Of course, there is the alternate The Bachelorette, which puts a woman in the suitor’s position, but audiences generally prefer The Bachelor because it’s apparently more fun to watch women make fools of themselves than men. All of the elements that make this soul-sucking show so addicting — the backstabbing, the crying, the foolishly falling in love with someone they’ve known for five seconds — are more rampant when women are the subjects. It’s disheartening to admit that these elements are what drive our curiosity in reality TV worlds, but the concept of schadenfreude dictates that we derive pleasure from other peoples’ misfortunes, particularly when several women are vying for one man’s love like moths to a flame. If you’re watching The Bachelor and have realized the extent to which you’re invested in the show is unsettling, there is an answer: Watch Lifetime’s show UnREAL for some necessary and intermittent reality checks.

UnREAL is a scripted series that explores the behind-the-scenes clusterfuck of producing a dating competition show like The Bachelor. The series stars Shiri Appleby as the steadfast, morally-conflicted producer Rachel who works alongside an ethically questionable staff and under a ruthless executive producer Quinn (Constance Zimmer) on a dating competition show called Everlasting. Adam, the Everlasting suitor, is a rich British man with ulterior business motives who agrees to be on the show to improve the success of his future business ventures and make his father proud. As he lackadaisically courts several bright-eyed women over the course of one season of Everlasting, Rachel’s, Quinn’s, and the rest of the staff’s meddling in the unfolding of events serve as illuminating reminders of what we might be watching when The Bachelor is on every Monday night.

At certain points on The Bachelor — and let’s take this current season for example — it feels like the chemistry between Ben Higgins and any one of the contestants is dynamic and real. Even when the girls are alone during confessional, they speak candidly and sincerely, trying to keep their heads up as they compete for Ben’s heart. UnREAL wants to expose the way a production staff that knows exactly what its viewers want expertly crafts these relationships through intense manipulation. Rachel constantly questions her role as an instigator of drama and rumors, but that doesn’t mean she isn’t incredible at her job.

On several occasions, Rachel befriends a contestant only to get her to open up and eventually cry, which a hidden camera captures so the footage can be used out of context to make the girl look insane. Another producer on the show tells the two black contestants that they have to play into the loud and petulant stereotypes of black women, like NeNe Leakes, if they want to stick around. One of the contestants takes his advice because she’s just on the show to get a line around the block for when her hair salon opens. Rachel also, on several occasions, tells Adam what he must do in each episode to keep the viewers at home on the edges of their seats. Once, she instructs him to kiss one of the girls in front of all the others so as to inspire jealousy, contempt, and all the other emotions that make “good TV,” according to Quinn’s depraved model.

Apart from manipulating the contestants on the show like a marionettes, UnREAL unveils the power struggles within the hierarchy of a television production team. Craig Bierko plays the role of Chet Wilson, the washed up, drug-addled founder of the Everlasting franchise, who storms around set high as a kite, reprimanding everyone and firing whomever at his whim. Chet has long been covering up an affair with Quinn because he’s married, but Quinn hates feeling like a secret mistress to someone she knows is a rich loser. Her frustration with her own stunted, sloppy relationship with Chet manifests in her ruthlessness and lack of morality as executive producer — feeling trapped by her shameful relationship with the show’s founder, she takes it out on the bright-eyed contestants. She has control over this part, and she won’t let that slip away.

UnREAL tackles mental health-related issues as well, which hammers home its don’t-believe-everything-you-see message. At the beginning of the first season, we learn that Rachel is back on Everlasting after pulling an unexpected, maybe manic, definitely drunken stunt on the finale of last season. In the flashback, she stumbles on set with a bottle of wine, rambling to the audiences at home about how her job is soul-sucking and wicked while the cameras are rolling. Quinn invites Rachel back to the set, though, because she is the only one who can stir the drama like she does. Plus, Rachel’s stunt did unexpected wonders for the last season’s ratings! She spent so much time coordinating the drama behind the scenes that she herself ended up being the main spectacle. Just because she’s back on the show, though, does not mean she has come to terms with the malicious work she does. In one episode, she goes home to visit her mom, a psychiatrist who has, against protocol, been treating her daughter for bipolar disorder and various other mental health disorders. Hurting innocent people for the sake of entertainment, the show suggests, has substantial mental health repercussions that arise from extreme guilt. None of this looks like fun.

I discovered UnREAL at the most opportune time — when my investment in The Bachelor was gaining a disturbing amount of traction. After Olivia was sent home the other week, I found myself considering the remaining contestants’ strengths and weaknesses as I laid in bed, and that’s when I knew I had crossed a line. The production for these kinds of shows is tailor-made for drama-seeking audiences, and the teams behind them do excellent jobs at creating gripping, drama-fueled worlds. Credit given where credit is due. At the same time, it’s crucial to take a step back and gain some perspective from time to time. With the first season of UnREAL streaming on Hulu, you can get back some of the morality that The Bachelor has stolen.