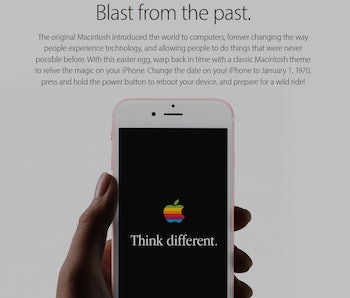 Apparently, 4Chan is not to be trusted. Who knew?

On Thursday, someone posted an image on 4Chan sending people on a “blast from the past, easter egg” hunt on their 64-bit iOS devices. A throwback 1980s Apple logo was promised to appear on your iPhone if you set it back 45 years and then “prepare for a wild ride.”

Well, this ride is going to suck. Business Insider is reporting that it is actually a bug that will render your phone completely useless. Like, it’ll become the most expensive paperweight you’ve ever owned. The only way to possibly remedy it is through a physical fix or getting a new phone.

It won’t happen on its own. You have to actually set your clock to January 1, 1970. The number has an internal value of zero, it’s some kind of Unix issue that screwed a bunch of Facebook users in December when a glitch encouraged them to get down with “46 years of friendship.”

The rainbow Apple logo is adorable, so, of course you love it. But make it your screensaver and save yourself a buttload of cash and heartache.

More like this
Innovation
Sep. 17, 2022
The 7 best magnetic charging cables
By Lauren Moison
Innovation
1 hour ago
Audio deepfakes are a major threat — here’s how researchers expose them
By Logan Blue, Patrick Traynor and The Conversation
Innovation
Sep. 22, 2022
Trash can-sized robots could revolutionize how you travel — but there's a catch
By Molly Glick
Related Tags
Share: