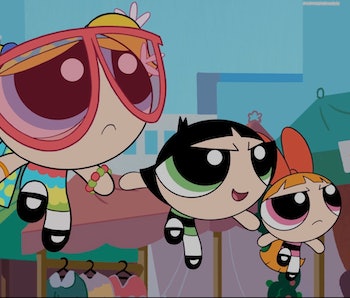 Last year, Cartoon Network announced a 2016 reboot of The Powerpuff Girls, the popular cartoon about the brightly brightly colored fierce crime-fighting trio. Today, the first footage from the reboot is available in an exclusive trailer that finds the three girls getting into their usual, villain-thwarting antics. A recurring plot line in The Powerpuff Girls, back during its original run on Cartoon Network, was that the villains would egregiously underestimate the girls’ strength. The fun came when they got to teach the bad guy a lesson, and it looks like the revival will have plenty more of that ass-kicking ferocity.

In the new trailer, a furry, macho lumberjack goes on a diatribe about how the city needs to get back to its “manly roots,” and he implores someone “man enough” to stop him from carrying out his evil plans. Of course, a misogynistic proclamation like that is the exact kind of idiocy the Powerpuff Girls prey on, and this time is no exception. Buttercup takes the lead on this one and quips back, “If you’re looking for a fight, ol’ Buttercup can satisfy your need for a beatdown.” In response the lumberjack calls her a “princess,” and that’s when she loses it: She punches him three times and then sends him flying, courtesy of her girly throwing technique.

The situation presented in the trailer is actually a very spot-on and relevant critique of the way men belittle women’s strengths. Buttercup’s ill-tempered response is her way of exerting power over a man who assumes he’s stronger. Also, the word “princess” reminds me of the way men might catcall a woman as she walks down the street, shouting at her to smile or to look happy. Buttercup is here to tell you that just because she’s a girl doesn’t mean she will act like a dainty princess. Down with gender roles! Although the show was intended for younger audiences during its heyday, I predict the reboot will appeal to older audiences, not just because that audience is grown up now, but also because there are some powerful, mature lessons to be learned.