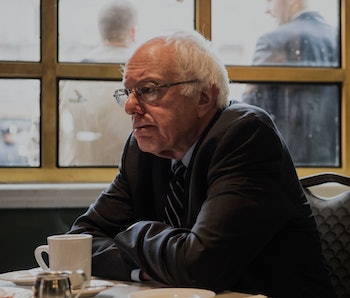 As Bernie Sanders becomes a more plausible candidate for the Democratic nomination, the electorate (and the commentariat) are coming to terms with the idea of democratic socialism. Sanders, who embraces the term, is calling for a political revolution and — when it comes down to it — a significant redistribution of wealth. In practice, this doesn’t look like base income so much as like an amalgamation of immigration and environmental reform, free health care, and affordable college tuition. This all has plenty of thinkers and talkers on the right and in the middle worried about what American socialism might look like.

The truth is: We don’t totally know. America is less homogenous than the Scandinavian flag bearers for high taxes and culturally and technologically a world away from the former U.S.S.R. or Venezuela. Still, anyone considering the significance of a Bernie Sanders presidency would do well to look at the checkered history of socialist executives. Countries that elect socialist leaders have seen extraordinarily mixed and just generally extraordinary results.

Vladimir Lenin is a polarizing figure, especially within Russia. Many regard him as a mastermind, an important progenitor of the Communist ideology, while others consider him nothing less than a genocidal tyrant. Numbers played in his favor when he came into power: His platform supported reforms for the proletariat, which comprised the majority of his homeland’s population. In the Revolution of 1917, he overthrew the Tsar in the name of the working class. While many feared that Lenin’s Bolshevik revolution would lead to anarchy, he viewed his own Communist “experiment” as the only option left to salvage Russia’s faltering middle class and restore power to the people. His term as the first socialist leader of Soviet Russia was nothing short of a disaster: censorship, systematic violence, famine, and insurmountable political rifts damaged his reputation and harmed his country. However, he did destroy an untenable system, which is presumably why he gets less flack than his successor, Joseph Stalin.

David Ben-Gurion was the first Prime Minister of Israel and is widely regarded as the father of the Jewish state. Born in Poland, Ben-Gurion was a prominent member of the Socialist Zionism (or Labor Zionism) movement, which sought to create a homeland for the Jews in Palestine. Ben-Gurion helmed several national projects — including the construction of a national water carrier and “Operation Magic Carpet” — and encouraged Jewish settlement in outlying areas. Before Ben-Gurion became Prime Minister in 1948, though, the Labor Zionist movement had been steadily moving away from socialist policies. For that reason it can be argued that Ben-Gurion wasn’t a socialist executive in any real sense. While Zionists still support much of Ben-Gurion’s work and regard him as a hero, most Palestinians feel differently. Though Ben-Gurion’s legacy is mixed, especially from a socialist perspective, mandatory service is an interest legacy of his cultural important. The state is still very much at the center of Israeli life.

Hugo Chavez served as the president of Venezuela from 1999 to 2013, and was the founder of the Fifth Republic Movement, which became the United Socialist Party of Venezuela in 2007. Before assuming office in 1998, Chavez founded a political movement called the “Bolivarian Revolution,” named after South American revolutionary Simón Bolívar,” which was a socialist revolution that sought to implement popular democracy and economic independence in Venezuela and drive out imperialism. This eventually evolved into the Fifth Republic Movement, the ideology that guided Chavez’s fourteen years as president. Chavez launched several programs while in office designed to help the lives of the poor, but his policies divided classes and largely ignored the upper and middle classes. He championed a centralized model of government, and his powerful rhetoric had the tendency to turn Venezuelans against each other. Despite the fact that his policies led to shortages of basic goods, a stunted role in the global market, and polarized the classes of Venezuela, he was consistently victorious in elections.

Salvador Allende Gossens was born into a rich, progressive family in Valparaíso, Chile and was interested in radical politics from a very young age. A self-proclaimed Marxist, he was elected to the Chamber of Deputies and went on to implement comprehensive social reforms as the minister of health. During his time in the Senate, Allende expressed his contempt for capitalism and imperialism and his desire to turn Chile into a socialist state, siting the Cuban Revolution as an inspirational model. He ran for president four times before he was finally elected in 1970, but Chile’s economic crisis at the time was not conducive to Allende’s radical leftist politics. He increased wages, froze prices, and took steps to improve education and health care, but his policies both worsened the Chilean economy and strained Chile’s relationship with the United States. In 1974, General Augusto Pinochet led a coup d’etat to overthrow Allende, but Allende committed suicide inside the presidential palace before troops could reach him.

Mao Zedong led the Communist Revolution of China, founding the People’s’ Republic of China and serving as the chairman of the Communist Party. An ardent follower of Marxism-Leninism at a young age, Mao took a firm stance against imperialism and capitalism. After co-founding the Communist Party, Mao led the Red Army in the civil war that broke out in 1927 between the Communist Party and the Kuomintang, another ruling party in China. On October 1st 1949, Mao founded the People’s Republic of China, and declared it a single party state. Mao attempted to turn China’s agrarian economy into an industrial one in a campaign called The Great Leap Forward, which resulted in widespread famine that killed millions upon millions of people. On the one hand, he is credited with driving imperialism out of China, improving education and healthcare, and increasing China’s population while some with more western ideologies consider him to be a diabolical tyrant due to the forced labor, routine executions, and the damage to the Chinese psyche involved in his rule.