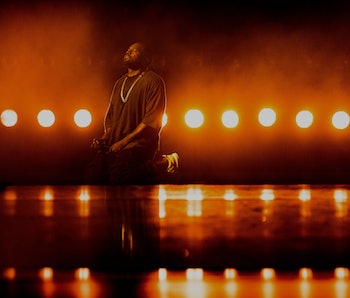 This week marks the release of Kanye West’s latest, The Life of Pablo. (Nope, it didn’t end up being Twerk, Ladies of Pasadena.) Leading up to its release, Kanye — also known as Conway — has been a busy guy: He’s switched up Pablo’s name a few times, beefed with Wiz, and — it seems like — defended Bill Cosby. His original tweet is here; suffice it that no one is more convinced of Bill Cosby’s innocence than Kanye.

It ain’t such a good look when more than 50 women have accused Cosby of sexual misconduct, assault, and rape. But Kanye does what Kanye wants and has continued his march forward — that tweet stands undeleted — planning a Madison Square Garden fashion show/unveiling of The Life of Pablo. When he tweeted out a seating chart for the event, comedian Todd Barry responded with the hot fire burn: