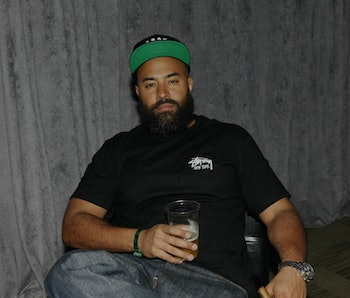 On NYC hip-hop radio station Hot 97 today, morning show host and polarizing personality Ebro divulged some inside information about the new Kanye album, T.L.O.P., which he heard at a private listening party. Other attendees of the party, according to Ebro, included A$AP Rocky, Tyga, Kim Kardashian, and, of course, North West.

Ebro was at liberty to discuss only some of the details of the record which he specified in a tweet, “Might be the best album.” He claims to have heard it four times. The best album ever, Ebro, or the best Kanye album? It would need to be the former, given the fact that Kanye’s career seemed like it might be over after last night’s tweeting. Here’s what the Hot 97 host specified about the new album.

Rosenberg then summed up what anyone listening must have been thinking, claiming that Ebro’s description was the “least cohesive, most difficult to understand, useless description” of the album.

Ebro then weighed in on Kanye’s “Cosby is innocent” tweet: “Technically, the verdict is out.” Sick move. What a reliable source! In any case, most people will get to hear this thing tomorrow and judge for ourselves.

More like this
Entertainment
6.22.2022 1:38 AM
Will there be an Obi-Wan Kenobi Season 2? Here’s every single detail revealed so far
By Jake Kleinman
Entertainment
6.27.2022 4:42 PM
Doctor Strange 2 director just revealed a huge Fantastic Four casting spoiler
By Alex Welch
Mind and Body
6.29.2022 6:30 PM
How music makes you feel may depend less on your brain than scientists once thought — study
By Allison Parshall
Share: