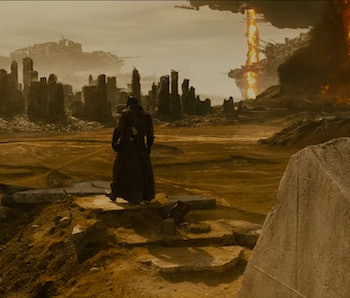 The last trailer to Batman v Superman: Dawn of Justice has arrived. While it’s got a chunk of stuff already seen in previous trailers, it’s also packed with new scenes that reveal major character moments. The trailer opens with a lengthy Batman solo adventure that looks straight out of Arkham Knight, and Superman’s face when Batman blocks his punch means their fight will be just plain awesome.

But there’s something we have to address: What’s up with the Chad Kroeger-esque post-grunge chode rock? Was Hans Zimmer too busy to give the marketing department something to work with? Did no one have Two Steps From Hell’s email? Batman v Superman is a premise maybe a decade too late, but this trailer definitely feels like it’s stuck in 2004.

On the flip side, at least we’re moving on from Inception’s BRAAAMs.

The trailer, presumably the same one attached to Deadpool this weekend, also shows off a little more of Jeremy Irons’ Alfred and Gal Gadot’s Wonder Woman. In fact, we finally hear her speak! Though she says nothing of real significance, Irons’ Alfred has some fun banter that feels more playful and less “distraught old British man,” which Michael Caine’s Alfred was all about.