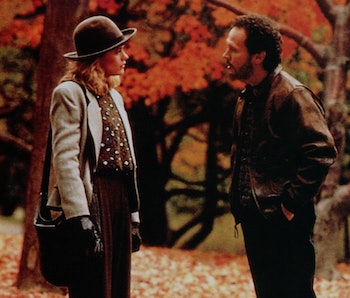 At what point do we admit modern dating sucks? Is it the millionth swipe left? Is it when the match turns out to be a bot, or worse, a bore? Dating is a different animal than even five years ago: dating apps have proliferated, relationships can exist solely through text messages, the nasty new concept of ghosting has followed, and our definition of “exclusive” adds to confusion, if not heartache.

The Washington Post sums up millennials as “coming of age during a time of technological change,” and that is no more obvious than how we pursue bed buddies. But as the digital realm grows old, is there anything new to learn from the analog?

I posed variations on this question to professional matchmakers, people living successful arranged marriages, and dating app developers, trying to discern whether the future of dating lies in traditions that predate Silicon Valley by thousands of years. ‘Cause why do all this demoralizing work when there’s mom or Aunt Sylvia?

Here’s what I found.

Orthodox Jews are onto something.

In Jewish Orthodox communities, Shidduch is a process where singles connect through a shadchan, or a matchmaker. Families of the single-and-ready-to-mingle approach the shadchan in hopes of finding someone who fits their bill. In that sense, it’s a forerunner to modern matchmaking agencies.

Because it’s so rooted in tradition, you might assume Shidduch would be packed with rules and procedures. And you’d be right. But Anna Richlin, the former owner of Chai Connections, a version of Shidduch she adapted for modern non-Orthodox Jewish singles, explains that the hurdles are actually a feature, not a bug. “What I was trying to do is offer more of a personalized touch,” she tells me. In the era of the app, Richlin believes dating is now too easy.

“The next person is a just a swipe away,” she says, unenthused. “It makes people think that they can always find someone better. You go on a date with someone and you think they’re great, but then you start saying, what’s wrong with them? You end up comparing all the different attributes and all the people you’re dating, and you think you can find the perfect unicorn.”

So, harmless swiping has morphed us into picky daters. To counteract this, Richlin began Chai Connections that adapted Shidduch to secular modernity. “I encouraged my clients to pick five or six non-negotiable qualities,” she says. “These aren’t little things, like they have to be 6-foot tall or have blue eyes. Do you have to be attracted to the person? Yes, that’s a given. But beyond that it should be, how do you want to raise your family? Do you want to send them to public schools? What kind of background do they come from? Is it important they have the same political views? These are the serious kind of qualities that can really be indicators of a good match.”

While Richlin was liberal in her version of Shidduch, she did see value in seemingly stricter traditions. Shomer negiah, or “protection of the touch,” is the forbidden physical interaction of the opposite sex until marriage — that includes holding hands. While you may view that as overly restrictive, Richlin thinks it works.

“The beauty is that it eliminates the confusion that comes with physical intimacy,” she says. “If you’re intimate before you actually know them, you cloud the relationship. You can’t think clearly about the common values you’re looking for because you’re confused by the sexual element.”

“If you have really good chemistry physically, that’s well and good but that does not mean you’re compatible,” she adds. While Richlin didn’t enforce shomer negiah to her clients, because good luck, she does think we’re missing the point. “We live in a very sexually driven society. It’s very hard for people to understand that you can still have great chemistry without testing the waters first.”

It isn’t hard to find nightmare stories of arranged marriages. But in writing about hers for Salon, novelist Tania Malik explained they’re not always the punishment westerners typically think of them. “It has evolved over the years into a meeting of mutual consent between both parties, and my Indian parents, products of an arranged marriage, had set up a meeting for me,” she wrote. “Problem was, I wasn’t consenting.”

That was until she met her husband, and over time they fell in love. When I reach Malik to ask her thoughts on modern dating, she makes an implicit case for having fewer choices.

“We feel independent and we definitely think that we know what’s best,” she tells me. “When you’re young, you want to dismiss what parents or anyone older is saying so you don’t want to take it as seriously, even if they’re right. But arranged marriages have changed: It is more like a blind date now. You do get to choose, but I think that initial hesitation, that ‘I don’t need your help,’ I do think that’s a part of [the stigma].”

Malik made it clear that “not everything is a perfect system,” but the major advantage of letting your parents play cupid? They may know you better than you do.

She explains: “A lot of things people in relationships argue about, whether it’s children, or cultural differences, they’re sorted out because you have the same upbringing and values. That’s why, in a way, arranged marriages have worked. These days everyone is so much more independent and wants different things. They think about the individual than the couple. I definitely think it’s a vetting process. To a certain extent you have more of a chance of it working.”

The digital world maybe haven’t allowed us to expose ourselves as much as we thought. “Facebook gets a very one-sided picture,” Malik says. “To have someone you trust say, ‘I know this person, they are a good person, give them a chance,’ I think that can be really helpful.”

Professionals work because you pay them.

“If a friend came to you and said, ‘I have someone for you to meet. She’s fantastic,’ you took it seriously,” Frankel says. “You prepared, you put a lot of effort. You gave it a lot of thought. Now, with swipe left, swipe right, it’s like, ‘If it’s not a nine or a 10, I’ll go home and go on another date.’”

Frankel, unlike your best friend or aunt who knows somebody nice, makes matchmaking a little impersonal by setting dates up like a job interview. And that, she believes, is key. “I do the screening,” she says. “I get to know them for an hour. I’m going to find out their real age, their real everything. For those reasons, [people] hire a matchmaker.”

In short, pros like Frankel will tell you everything that your friend or aunt will probably hide or “forget” to mention.

Frankel knows there are benefits to allowing friends set your weekend calendar. But like retiling your bathroom, getting a haircut, or inking a tattoo, sometimes you suck it up and call a professional.

“I just don’t think friends are going to actively be focused on someone else’s love life,” she says. “Everyone has their own life to deal with. It may be fun for a little while, or one try. I don’t think it’s going to be perpetual.”

Frankel is a fan of online dating — it’s how she met her husband, and in fact offers workshops to improve one’s online profiles — but she warns it still has pitfalls. “Without question, almost every person online lies,” she says. “Men lie about their height, women lie about their weight and their age. People are marketing themselves and it’s not always 100 percent honest.”

Frankel also observes that apps already offer mutual connections, lending power to the singles to take initiative. “People are already being their own matchmakers through Tinder and Hinge, reaching out to mutual contacts,” she says. “I just don’t know if friends and family doing it on your behalf will go anywhere.”

Apps are trying to take from the best of all worlds.

The strength of apps tends to be their weakness: They simply make it too damn easy to find the next person. (“I feel the demise of courtship and romanticism,” Frankel says.) Which makes Spritzr a curiosity.

Spritzr is a dating app that lets singles find dates or lets couples find matches for their single friends. Unlike Hinge or Coffee Meets Bagel, which function as matchmakers on their own, Spritzr gives discretion to the people in your social network. In essence, Spritzr is the first app couples can be on with their single friends.

“Less than one in four users of online dating actually find a relationship,” Spritzr founder Manshu Agarwal explains to me. “It doesn’t work.”

Speaking to Agarwal, he explains why an old tradition is the key to the digital age. “We’re social creatures. We’ve always met someone through our social networks. Social networks gives a lot of information that a computer algorithm or mobile dating just cannot provide.”

An Indian man raised in the United States, Agarwal wasn’t thinking about introducing his culture to a worldwide audience. Instead, it was his Frustrated State of Singledom, bred here in the land of the free. “It was really my experiences here in the States that helped me create Spritzr. I found that my best dates were coming through friends of mine.” In contrast to professionals like Frankel, Agarwal thinks friends do make the best cupids.

“No matter how many questions they as, a human matchmaker is never going to be as good as a friend.”

Agarwal thinks matchmaking services have their worthwhile function — certainly better than some dating site’s algorithms — but he firmly believes “intimate social connection among friends” triumphs over impersonal evaluations. “A friend just has that intuitive instinct. A person that’s not a friend can be useful for sure [but] friendship is very different in terms of the knowledge that you have.”

More like this
Gaming
7.29.2022 5:08 PM
Six things Xenoblade Chronicles 3 doesn't tell you
By Jess Reyes
Culture
23 hours ago
The Sandman: 11 characters pulled from DC comics history
By Robin Bea
Science
22 hours ago
Is my dog depressed or happy? Pet experts explain how you can tell.
By Tara Yarlagadda
Related Tags
Share: