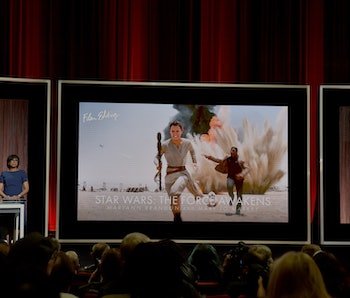 When the Oscar nominations were announced early last month there was something conspicuously missing. No, it’s not the fact that all the nominees in the major categories were white, which unto itself is another huge problem. The problem was that Star Wars: The Force Awakens, the newly minted highest grossing domestic movie ever made and the movie that jumpstarted the Star Wars saga was left off the list of nominees for Best Picture. Because of its resounding success and the fact that it was, you know, actually good, many predicted it would garner the franchise’s only other Best Picture nomination besides the original. But alas, it was snubbed. With at least no end in sight for Star Wars movies, was this the last time we could expect a Star Wars movie to plausibly compete for a spot in the industry’s highest honor?

The plaudits for George Lucas’ original were a genuine surprise. In 1977, Star Wars became the first science fiction film to be nominated for Best Picture, and ended up sweeping the technical categories by winning six out of its ten nominations. It also picked up a Special Achievement for Sound Effects Editing to boot. But it failed to collect awards hardware for Best Supporting Actor for Alec Guinness as Obi Wan Kenobi, fell short in Best Original Screenplay and Best Directing for Lucas, and lost to Annie Hall in the Best Picture category. Still, six out of ten ain’t bad.

After that, no other Star Wars movie has managed to drum up the same amount of serious Oscar clout as the original, not even the now-beloved sequel, The Empire Strikes Back. People forget the tepid response the downbeat sequel received when it was released in 1980. Vincent Canby in the New York Times called it, “amusing in fitful patches but you’re likely to find more beauty, suspense, discipline, craft and art when watching a New York harbor pilot bring the Queen Elizabeth 2 into her Hudson River berth, which is what The Empire Strikes Back most reminds me of,” and concluded, “It’s a big, expensive, time-consuming, essentially mechanical operation.”

It was doomed to huge box office returns and little-to-no love on Oscar night. Needless to say, none of the other Star Wars movies so far have been nominated for Best Picture. The Force Awakens it seems, was the last hope. Otherwise movies like Star Wars are usually relegated to the technical categories. It’s a habit of the Academy to force big blockbusters out of the more high profile award spotlight. But it’s also a tendency that has the dubious distinction of making the sentence “The Academy Award-nominated movie, Transformers: Revenge of the Fallen” a disappointing reality.

The original Star Wars at least caught people off guard, and managed the one-two punch of being the biggest movie ever made at that time while also being a legacy of sorts. Lucas’ previous film American Graffiti was nominated for Best Director and Best Original Screenplay, and the Academy saw fit to allow Lucas into the club, but just as a nominee.

Through the dark times of the prequels and till now, The Force Awakens was heralded as a return to form of the originals, and intentionally so. Since Disney bought Lucasfilm and decided to make more Star Wars movie the mandate has always been to harken back to the DIY, story-focused aesthetic of the original trilogy. And The Force Awakens did that. It was a crowd pleaser, and did exactly what the original did to audiences in the late ‘70s: it made them feel like a kid again.

Did it deserve a Best Picture nomination? Probably. And you should be angry insofar as you see the Oscars as a viable authority on what the actual best movies in a given year actually are. Unfortunately the Oscars usually only have room for one blockbuster to crown, and this year’s populist nominee is undoubtedly Mad Max: Fury Road, a movie that 100 percent deserves to be in that position. That movie has the fascinating distinction of being the only four-quel nominated for Best Picture, and the second movie besides Toy Story 3 to be nominated for Best Picture without any of its predecessors being nominated.

And though Fury Road deserves it, The Force Awakens does too. Unfortunately the series’ track record and being snubbed will probably mean we won’t see another Star Wars movie on the list of nominees anytime soon. That is unless one of the standalone movies is ridiculously exceptional or whether Rian Johnson or Colin Trevorrow’s next installments can buck the trend. Maybe Episode IX could pull a Return of the King and win the Best Picture statue as a kind of condolence for the whole new trilogy. But don’t count on it.

The Academy is set in its ways, but seems to be changing. Maybe a lighter opinion on blockbusters, especially ones as influential as Star Wars, is exactly what’s needed. In that case, Star Wars might win for more than just its special effects.