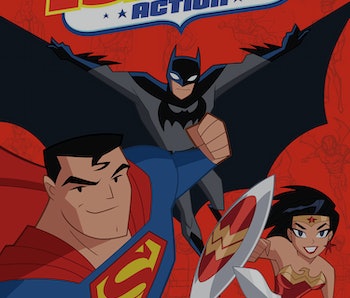 Batman, Superman, and Wonder Woman will unite on the big screen in Batman v Superman: Dawn of Justice on March 25. But DC’s trinity will also return to weekly television on Cartoon Network in a new quarter-hour series, Justice League Action. Iconic voice actor Kevin Conroy, who played the Dark Knight in the Emmy-winning Batman: The Animated Series is confirmed to reprise his role along with Star Wars’ Mark Hamill, who is returning as the Joker in a recurring role.

Per DC’s press statement, the series will feature 11-minute episodes “with lightning-paced action” in which Superman, Wonder Woman, and Batman lead “the always-rotating” Justice League to defend the Earth from space invaders and magical threats.

With a distinctly baby-faced yet nostalgic style, the series appears to aim at a young audience akin to DC’s Teen Titans Go!, which premiered in 2015. Before that, the last DC series was Young Justice, which had a cult adult audience but was canceled after just two seasons. DC also has a regular output of adult-targeted animated movies, like the recent Batman: Bad Blood and the upcoming Justice League vs. Teen Titans.

More like this
Entertainment
16 hours ago
'Umbrella Academy' Season 3 release date, trailer, cast, and plot for the Netflix superhero series
By Mae Abdulbaki and Mike Bloom
Entertainment
5.18.2022 9:36 PM
Kate Siegel says Netflix’s Fall of the House of Usher is “like nothing anyone has ever seen”
By Dais Johnston
Entertainment
5.18.2022 3:49 PM
Rick and Morty: The Anime could fix the show’s biggest problem
By Corey Plante
Related Tags
Share: