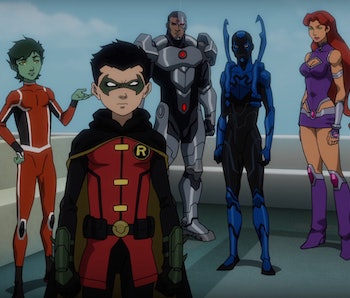 The premise to Justice League vs. Teen Titans is fairly self-explanatory. The gist of it involves the demonic villain Trigon taking control of the Justice League, turning them into his puppets. The only ones who can snap them out of it are their younger and lesser experienced students, the Teen Titans. It’s youth versus age and experience, and anyone familiar with DC lore knows how great these confrontations often are.

When it comes to superheroes, there is a tendency to assume that animation plays second fiddle to the tangible world of live-action motion pictures. Animation, however, is how many fans were first introduced to the heroes who now overcrowd our movie and television screens. Superhero animation has a rich history that traces back to Fleischer Studios’ Superman. Still, it seems that once Christopher Reeve took his first flight in 1978, animation was no longer enough.

Yet, unrestricted by special effects budgets, superhero cartoons saw a resurgence in the ’90s, as after-school serials and Saturday morning television exploded. Marvel’s X-Men and Spider-Man and DC’s Batman: The Animated Series, Justice League, Justice League Unlimited, Teen Titans, and more catered to children and devoted fans who embraced the essence of the beloved comic book icons in 2D.

In 2007, DC ventured into the waters of more adult-oriented animation with Superman: Doomsday, an adaptation of the infamous 1992 comic The Death of Superman. Though this could, at first glance, be mistaken for a children’s cartoon, Doomsday was rated PG-13 by the MPAA and loaded with enough blood and violence to rival M-rated video games.

Critics were divided on Doomsday, but its strong sales proved the audience demand was high, birthing DC’s now successful series of animated features. The live-action fares can be hit-or-miss for fans loyal to the source material. Unfortunately for them, these animated summer releases are engineered to be four-quadrant crowd pleasers — though not for the purpose of selling toys, as DC Animated doesn’t have to sell merchandise to be deemed successful.

Whether it’s faithful adaptations like Justice League: The New Frontier, experimentations like the Batman: Gotham Knight anime anthology, or simply just phenomenal shit like Batman: Under the Red Hood, DC Animated is a pure celebration of its comic book heritage.

As for Justice League vs. Teen Titans, the premise isn’t quite as steeped in lore as fans of the canceled Young Justice series might expect. A mind-controlled Justice League is also a weaker premise than say Civil War — a story that politicizes the tradition of having former super-friends square off. It is also not going to be getting much spotlight given that Dawn of Justice is just around the corner and will be bringing two of DC’s most iconic heroes into the same live-action picture with plenty of mythology to go around.

Maybe the real showdown isn’t DC versus Marvel after all, but the internal struggle between DC live-action and DC Animation. Whoever wins, fans aren’t likely to go wanting any time soon.