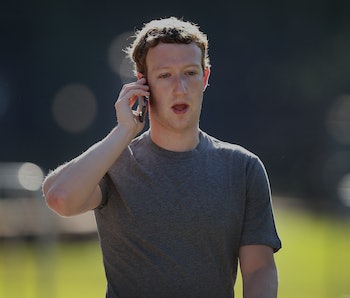 Like the sea squid who probes the darkest holes it can find, Facebook is casting its tentacles wide. The ubiquitous social platform has moved from meme-spawning grounds into cutting-edge A.I. and toward becoming a de facto login system for apps like Spotify and Uber. And now the squid might start stuffing in its beak what it had once been content just to hold: A recently filed patent application indicates the social media company is eyeing the ride-sharing game.

The proposed system would mesh with current event RSVPing. In addition to “yes,” “no,” or “our friendship doesn’t rate a definite commitment,” guests would indicate they’d want to hitch a shared ride. Facebook would facilitate the rest, including a map that shows the path of least distance between destinations, if the driver plans on snagging multiple passengers along the way.

The images in the patent app (which include a weird Mitt Romney burn?) indicate Facebook might try to pair you with people who share your musical tastes; in case a carload of people energetically mouthing the words to “Mr. Brightside” is your jam, the Zuck will provide.

Patent applications, of course, are just that — applications for things that might never see the happy clicks of a user base. Still, Uber might want to keep an eye out for Facebook — as well as cabbies — as it watches the throne.