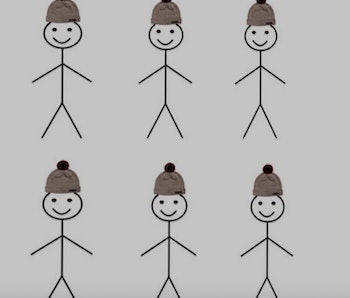 The Be Like Bill meme had been an annoyance of the blathersphere — an object of internet virality not quite on the mania-level of The Dress but employed frequently enough to merit rapid scrolling when unfortunately encountered on the Facebook profiles of people you haven’t spoken to IRL in the past five years. Then the Be Like Bill meme-generator was introduced. Now it’s a monster.

Meme historians of Know Your Meme peg the emergence of Be Like Bill to around October 2015. It was created as an “exploitable” meme — meaning it’s a fill-in-the-blank opportunity; the image remains the same while what Bill does or not changes. The Bill of Be Like Bill has the passive aggressive nature of the worst person you know, designed as a way to call out the behavior you find most obnoxious. But it’s even better, because it’s not really you calling your Facebook friends out! It’s Bill, dummy!

Then the meme-generator took the subtweet nature of Bill and upped the moral superiority — tell your friends to not be like Bill, but to be like you.

It’s undeniable that Be Like Bill and its frothing cousin Be Like “Fill In The Blank” are the perfect creations of the internet — a troll to out-troll all trolls. Bill is against self-indulgence: taking too many selfies or posting too many pictures of your pets. Complaining about Bill is decidedly so not like Bill, an opinion echoed in the words of its creators Eugeniu Croitoru and Debabrata Nath.

“Most people tend to take it in the way it should: as a joke and something which is meant to be funny and not taken seriously,” said Nath to BuzzFeed. “There are the occasional haters and people who don’t get it, but that’s fine.”

The meme is ready-made to shut down dissenting opinion. I made this one in anticipation, feel free to use.

The thing is, I do get Be Like Bill. It’s a web-ready embodiment of Nietzche’s herd morality disguised as an etiquette class; where people are encouraged to be modest, submissive, and conforming. Mobs demand the status quo of moral behavior and fear that the loss of morals generally leads to immoral behavior. Sharing a Be Like Bill hating on people who upload post-gym pictures doesn’t promote better behavior, it just makes your Facebook friend who posts that picture feel shitty.

Our social tendency is to jump onto memes — the unfortunate part is that this meme isn’t just for fun, like the llama chase of 2015. If you’re trying to explicitly curb the behavior of others I’ll tell you the same thing I told my Grandpa when I taught him how to use Facebook. Go to their page, click unfollow right below the cover photo, and you don’t have to ever see those posts you hate so much.

More like this
Innovation
8.15.2022 8:30 PM
This high-tech camera may help protect our identities — here's how it works
By Molly Glick
Innovation
10 hours ago
Scientists finally found an efficient way to recycle plastic foam — it could make them rich
By Joanna Thompson
Innovation
10 hours ago
After quitting the ISS, Russia reveals its next-gen space station
By Darren Orf
Share: