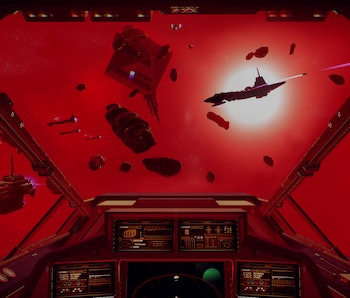 The sprawling galaxy of No Man’s Sky, the upcoming sci-fi game for PlayStation 4 and PC that affords players freedom to explore, is both breathtaking and intimidating. In its endless system of stars and planets ripe for colonization, what illicit goods would run in a theoretical black market? Can they even be defined when the game lacks defined cultures or a central governing body that informs of its universe’s moral compass?

There is semblance of rules in No Man’s Sky but they’re for the most part unknown (and hinted by director Sean Murray, probably evil). The game is built for exploration with little thought to sovereign proclamation. No Man’s Sky, in that sense, is a proxy for players to be outer space Lewis and Clark than intergalactic conquistadors.

But there is already a presence on some planets: sentinels. Based on the nature of their programming, excessive hunting and mining are illegal, but on what grounds? Is poaching illegal because of animal rights, or is it because they’re cogs in a highly delicate ecosystem? Answers beg only more questions, which do little to shape the procedurally-generated universe’s moral compass.

A central narrative is absent in No Man’s Sky, so players won’t have defined missions or a finite journey. Like real life, the game is open across its staggering 18 quintillion planets. Criminal trading would be possible if the game’s economy weren’t so restrictive — trade is only possible at designated ports. Therefore, one shouldn’t expect to swagger into the game like Han Solo or Mal Reynolds and take up illegal gigs. Piracy is in the game, but that’s not a path for players. Pirates occupy a “raider” role akin to Babylon 5: convenient pests to kill and cash in on the occasion.

It’s overwhelming to lay out plainly what illegal items could be traded across space ports when there is little understanding of its cultural values or rigid societal structure. For that reason, we can only lay out what could theoretically be a hot commodity based only what the game allows.

No Man’s Sky unique periodic table is vastly different from the one in our real world. The game allows players to mine and craft various elements like cooks in a fully stocked kitchen. By that virtue, is it possible to create a galactic Heisenberg with the purest cut engineer to build a criminal enterprise?

Like poachers in Africa, discovering the rarest species and harvesting their innards could be a reality — if the game even allowed it. The price of elephant ivory, besides the loss of life, is estimated to be a whopping $1,500 on the black market. What could procedurally-generated elephant ivory fetch?

The firepower Sentinels have are ludicrously strong and their mysterious origins are begging to be discovered. In a tangible No Man’s Sky universe, Sentinel weaponry would be sought after by firearm manufacturers, and no doubt software companies would salivate at attempting to reverse engineer and learn Sentinel programming.

Stealth systems and EMP devices for ships and weapons

The mysterious Big Brother at the center is the game’s biggest question, but not all explorers are intent to figure it out, let alone pick a fight. Stealth systems and EMP devices for ships and weapons — perhaps the Sentinels locate misbehaving players via weapons location? — could be a hell of a lucrative market.