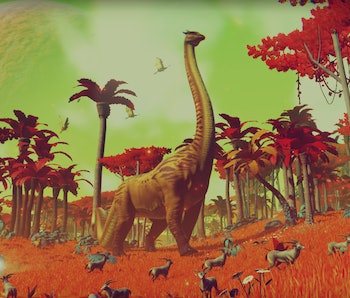 When you land on one of the 18 quintillion planets in No Man’s Sky, odds are you’ll be the first human to walk its procedurally generated wilds. But you will not be alone. The game’s nearly infinite universe is populated by a nearly infinite array of animals. And it’s up to you, weary space wanderer, to document them and name them or slaughter them en masse.

This fact of No Man’s Sky makes the folks at People for Ethical Treatment of Animals, one of the most recognized non profit agencies dedicated to animal rights and welfare, very happy indeed. After all, it represents a historic break from blockbuster games providing a forum for gratuitous, gamified slaughter. From Duck Hunt and Big Game Hunter to Final Fantasy and Metal Gear Solid 3, video game designers have largely cast animals in the role of target or, at best, target practice.

Not so Hello Games and not so No Man’s Sky.

“We hope that exploring fictional planets will awaken in players an interest and fascination with animals on our own planet,” says PETA Marketing VP Joel Bartlett, who runs the groups in-house video game production efforts (mostly flash shorts and skins like “Mario Kills Tanooki”).

The reasons for Bartlett’s optimism have to do with specific elements of gameplay, namely Sentinel Drones and exploration.

“Earth doesn’t [have natural] help [for] animals when they’re threatened,” Bartlett says, pointing out that trigger-happy drone systems activated by animal cruelty in No Man’s Sky provide considerable assurance of safety — as well as moral guidance. The “Wanted” system recalls other games like Grand Theft Auto, but here you’ll be targeted for killing alien buffalo, not San Andreas pedestrians.

Then there’s the element of exploration. Bartlett laments that most people “don’t explore, go scuba diving, or snorkeling” to see other forms of life. “There’s so much to explore here [on Earth] with respect to environment. I guess this might be something the developers are trying to do,” he adds.

Hello Games, the developers of No Man’s Sky, may not have intended to inspire empathy via exploration. Freedom is their gift to give players, but based on multiple interviews a respect for wildlife appears unintended or inconsequential.

In fact, director Sean Murray seems casual about the occasional road kill. During an interview with Eurogamer, he confessed to something he does for amusement:

“I find myself … being on a mountain and scanning and then just destroying everything around me. Doing the usual stupid things of drilling a hole and having an animal fall into it. Stuff like that keeps me amused. And when people are like, ‘What do you do?’, the reality is, for some people just that, and that’s fine.

Still, Bartlett believes holds on to the belief that video games can be an effective way to talk to people about social issues. PETA’s games have, to be fair, stirred up discussion — though the environmental message of No Man’s Sky, if there truly is one, is far subtler.

Could the wild majesty present in No Man’s Sky be the next best thing to visiting Yellowstone when it comes to teaching respect for nature and animals? Could there be an “overview effect” for wildlife? The effect won’t be as extreme as that, but it might be felt. You can’t kill the dog in Fallout 4 anymore. No one but the dog lives forever.

“I think there’s a thoughtfulness that can come from playing,” says Bartlett. “Not everyone will go down that path, but humans have a pretty innate compassion for animals. This game is counting on our natural empathy, and we have a natural sense of exploration that has been important to human history.”

More like this
Mind and Body
21 hours ago
Scientists mapped the brain circuitry involved in pleasurable touch in mice
By Elana Spivack
Science
Feb. 5, 2023
The Plague Is Still Here — And It Could Infect Your Cat
By Tara Yarlagadda
Science
Feb. 1, 2023
Look! Five New Snake Species Discovered in a Habitat Devastated by Mining
By Robin Bea
LEARN SOMETHING NEW EVERY DAY.
Related Tags
Share: