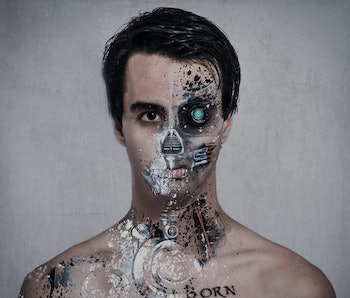 In November, Transhumanist Party presidential candidate Zoltan Istvan told Inverse he was concerned that another country would beat the United States to a “political transhumanist-inspired revolution.” At the time, Istvan didn’t throw out the name of any one country, but the obvious choice gives a bit of Cold War flair to Istvan’s warning. Though the Transhumanism movement is dominated by Americans and Western Europeans, similar ethics have long been popular among Russians, for whom the body and the body politic have always been intimately connected.

The Russian Cosmists were late nineteenth and early twentieth century thinkers, whose philosophy, according to anthropologist Anya Bernstein, proposed a “unique combination of scientific and occult ideas.” Cosmist writings were banned during the Soviet period, but those who protected their works were devoted to the idea of “transcendence of space, time, and the body, mastery of nature, settlement of the outer space, and even the resurrection of the dead.”

They were also, it’s worth noting, very, very into being Russian.

In the book The Russian Cosmists author George Young writes that many Cosmists believed their philosophy could satisfy the “Russian soul” and considered their ways of thinking to be patriotic. Cosmist theology — it has more than a tinge of the religious to it — centers around the idea of a bold, happy future controlled by Russia.

“If Cosmism is viewed by its prominent adherents as the most Russian and therefore most significant current of thought running from the nineteenth through the twenty-first century, outside Russia the movement and the figures associated with it are all but unknown,” writes Young. “The Western transhumanists, the cryonicists, the immortalists, and certain new age spiritual movements share some Cosmist idea and practices and present the closest foreign analog.”

A resurgence in the popularity of the Cosmist ideas and writings in Russia has led Bernstein to question whether the way of thinking is now “a nationalist movement, indeed, a new Russian idea.” She points to the recent firing of the editor of the journal Russian Planet for failing to use the platform to reflect Russia’s preeminence as a cultured nation. The firing offense? He didn’t reference the Cosmists enough.

Bernstein also raises the point of Vladimir Putin. While neither President Putin or the Russian government has ever offered official support of the Cosmist way of thinking, some truthers have taken to analyzing the Russian leader’s public statements. In a December speech the President announced, “We all want the same thing: well-being for Russia. So the relations between business and the state should be built on the philosophy of the common task, partnership, and equal dialogue. The Philosophy of the Common Task was the title of collected works of Cosmist icon Nikolai Fedorov so in the words of conspiracy theorists everywhere, you do the math. Actual endorsement notwithstanding, a philosophy that encourages cracking the code to live forever certainly seems on brand for Putin. Some cartoonists have joked that Putin supports Cosmist/transhumanist initiatives so that he can extend his life enough to keep running for President.

This means we could see a robo-President hunt a tiger in our lifetime.

While Putin has stayed mum on his Cosmist leanings, other Russians blurring the line between Cosmist and transhumanism have been more upfront with their support of a cyborg future. Russia 2045 is the project of millionaire media mogul Dmitry Itskov, whose initiative to replace biological bodies with artificial avatars may seem insane but not not-insane enough to not be profiled in the business section of The New York Times.

In a hype video that would make Michael Bay proud, Russia 2045 declares that our civilization has become like an “uncaptained ship sailing on rough seas with neither chart nor compass.” What society with our imperfect biological bodies need is the technology that will extend our lives — and could very well mean that we live forever. While the organization’s website notes that a “100 percent guarantee of implementation within a specific time cannot be provided” it does encourage people to start thinking about what robotic avatars they will prefer — a robotic copy of a human body with a brain-computer interface, a robotic body that will carry your head once your first body runs out of steam, or a “completely non-biological” body and brain onto which your consciousness has been uploaded.

Russian-identifying martial-artist Steven Seagal is a supporter of the 2045 project, and personally wrote to Vladimir Putin requesting that he support what he describes as a “social movement.” Inverse has reached out to Seagal to see if his support for the project still stands.

“For me it is obvious that this initiative will strengthen Russia’s position in world science, [and] underline Russia’s role in the international community as the country claiming leadership in setting and solving global problems for the betterment of mankind,” writes Seagal in his letter.

Bernstein proposes that Cosmism has the possibility to strengthen Russian national identity in the same way the country got jazzed about Eurasianism in the early 2000s. But with its’ blending of occult-like philosophies and reliance on technology it’s still very taboo in more conservative circles, especially among the Russian Orthodox church who aren’t ready to concede that transhumanism is the “religion of the 21st century.”

Part of the underlying tenets of Cosmism is that Russia will have a active role in controlling the future; of managing the cosmos — basically the most Kremlin-ready philosophy ever.

More like this
Science
11 hours ago
The Weirdest Sci-Fi Apocalypse on Netflix Reveals a Controversial Field of Medicine
By Tara Yarlagadda
Science
7 hours ago
An Upcoming Mission to the Dark Side of the Moon Could Radically Reshape Astronomy
By PAUL M. SUTTER and Universe Today
Science
6 hours ago
The Milky Way Galaxy May Be a Unique Heavyweight in One Weird Way
By Evan Gough and Universe Today
LEARN SOMETHING NEW EVERY DAY.
Share: