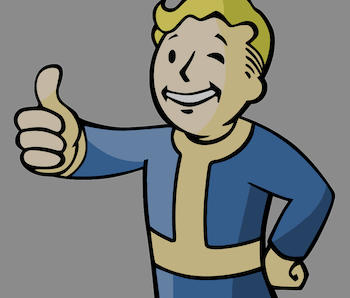 If you’ve ever played the Fallout video game series, you’ve almost certainly seen a picture of Vault Boy, the mascot of the Vault-Tec Corporation. He’s basically the post-apocalyptic wasteland version of Micky Mouse — or perhaps, given the potential lethality of his message, Joe Camel.

Vault Boy poses with his hand stuck out in front him, thumb pointing up, and a wink and a smile. Most people probably think this is just him being a positive, chill, corporate bro, but there’s plenty of reason to believe that Vault Boy is doing something else entirely: squinting at a mushroom cloud. The reason people think this — and plenty do — is that Americans used to be taught that if a nuclear bomb exploded in the distance they should hold out their arms, stick up their thumbs, and see if the cloud was bigger or smaller than their opposable digit. If the cloud was bigger than your thumb, teachers explained, you’d know that you were in the radiation zone and should start running.

This explanation explains why Vault Boy appears to be winking — an otherwise strange gesture for a security company. It does not, however, explain his shit-eating grin.

Instead of arguing whether the architects of the Fallout universe referenced the nuclear rule of thumb on purpose or not, let’s chase the bigger answer. Does science support the theory at all. What happens if the mushroom cloud is eclipsed by your digits?

For those of you who aren’t nuclear physicists bent on destruction, there are some important things to know about A-bombs. First, not all bombs are created equal — different bombs are made differently, and explode with different intensities. The fireball created by the Fat Man bomb dropped on Nagasaki was a 20 kiloton bomb with a 0.1 kilometer radius. By contrast, Castle Bravo, the first hydrogen bomb tested by the U.S. in 1954, was 15 megatons, and produced a fireball with a radius of 1.42 kilometers.

For argument’s sake, however, let’s say we’re working with a 10 kiloton bomb. When a nuclear bomb goes off, it releases an intense flux of photons that creates a wave of extreme heat. Bomb victims can experience third-degree burns in mere seconds. Then, a supersonic blast pushes a pressure front forward that blows out untying in front of it. As this pressure front diminishes, a negative overpressure phase creates a void that needs to be filled, so you have a reversal of air rushing back towards the explosion. After this, you’re likely to see scattered fires ignite debris in the wake of the blast area. And of course, watching the thermal flash with your own two eyes could result in temporary or permanent blindness.

According to a nuclear detonation response guide written by Lawrence Livermore National Laboratory (LLNL) in California, the places most heavily hit by a 10 kiloton bomb will be within a half-mile’s distance of the initial blast. Places as far as three miles will still feel thermal and pressure effects.

Even if you’ve managed to avoid all of that destruction, there’s still the sticky issue of radioactive fallout to contend with. Brooke Buddemeier, a health physicist at LLNL, says that the “prompt” radiation hazard almost immediately expelled from a 10 kiloton bomb blast will only go for about one mile in any direction. However, the fallout cloud could travel up to five miles into the air, which could then travel about 10-20 miles in the downwind direction.

When it comes to a nuclear bomb, the key is understand where you are in relation to wind. And sadly, with how unpredictable winds can get, you might not really have enough time to avoid the fallout that’s pushed off by upper atmosphere winds. Ruth McBurney, the executive director of the Conference of Radiation Control Program Directors in Frankfort, Kentucky, says “shelter is the preferable strategy if you think you may be in an area where fallout may be present or approaching.”

Neither Buddemeier nor McBurney has heard about the ‘rule of thumb’. They say it might possibly work if you’re downwind and need to estimate whether you’re too close to the potential encroachment of the fallout, but there are too many factors involved (like visibility of the cloud under an overcast sky or at night) to say it would be useful during the aftermath of actual nuclear explosion.

The U.S. Department of Energy’s National Nuclear Security Administration was more blunt, with an office spokesperson telling Inverse, “We have been unable to find any truth to the internet rumor.”

In other words: don’t take your cues about how to respond to a nuclear explosion from Fallout. Because, in fact, trying to survive by means of a decades-long habitation in a fallout shelter isn’t even a great strategy. The best survival plan, after making it clear from the initial detonation, is to find immediate shelter, and to continue jumping between temporary shelters that can provide more protection from the radiation. Eventually, you’d want to make your way out of any hazardous area within a few days, if possible.

Given that North Korea has just claimed to have tested a hydrogen bomb, now might be a good time to develop a good strategy to deal with a nuclear fallout.