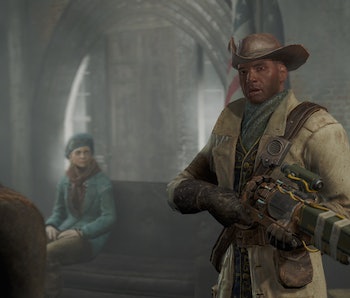 November is traditionally the video game industry’s biggest month. With Rise of the Tomb Raider, Star Wars: Battlefront, Call of Duty: Black Ops 3, and Starcraft 2: Legacy of the Void all competing for attention, how is Fallout 4 the game dominating conversation and sales? What makes Fallout special?

So what is Fallout 4?

Quick facts: Fallout 4 is a post-apocalyptic role-playing game/first-person shooter made by Bethesda Softworks. It was released on November 10th for PC, Xbox One, and PlayStation 4 systems. It’s set in Massachusetts roughly 200 years after massive nuclear war.

Bethesda games are built around exploration, though, so what Fallout 4 is really about is wandering through the game’s wasteland setting, finding an interesting quest or location, and diving down the rabbit hole. It’s a formula that’s worked well for Bethesda; their last two games, Fallout 3 and The Elder Scrolls V: Skyrim, were both critically acclaimed hits, with the latter sweeping 2011’s Game of the Year awards. Their next game was inevitably going to be a big deal, but the Fallout series has special cachet in the video game world.

The Fallout series is filled with classic games that helped reshape the entire role-playing game genre into what it is today. The original Fallout was released in 1997, after the Western RPG genre had almost totally collapsed (Western RPGs: typically games made in the Americas or Europe, primarily to distinguish them from the specific style of Japanese RPGs like Final Fantasy). The genre, once filled with the best games games around like Ultima and Wizardry, had essentially disappeared. Fallout 1 redefined what the genre would look like.

The first key element: Fallout 1 was about character-building and customization. It did this in two ways: allowing you to build your character’s morality via choices during quests; and role-playing customization, where you built stats and skills. This combination was entirely novel — a game whose systems were dedicated to letting players be who they wanted to be within the world.

Fallout’s second great strength was its sense of tone and style. Each game was built on the juxtaposition of 1950s nostalgia, cartoonish hyper violence, and post-apocalyptic survival. It’s easier to show this than describe it, so here’s the idea in probably its purest form, Fallout 2’s intro:

The segué from Louis Armstrong’s “A Kiss to Build a Dream on” into the brutal reality of the Wasteland remains, even with its 1998 computer graphics, one of the best examples of Fallout’s aesthetic appeal.

Is there thematic depth as well?

Yes, with some pretty major caveats. Fallout’s pseudo-1950s nostalgia turns much of the series into a criticism of “the American Dream,” with nuclear families and white picket fences turned into ash and garbage. This is more of an aesthetic critique than a literal one in the narrative, but it helps tie the series together.

In the literal sense, the Fallout series also focuses on the dangers of absolute, non-transparent power. One of the most common side quests in the game is the discovery of a Vault — a huge nuclear war shelter, designed for hundreds of people — that’s gone to hell. Each one was a different experiment by Vault-Tec, each with an Overseer given absolute power, attempting to enforce the experiment. Each one turns into its own apocalypse, acting as a microcosm for the poor leadership that leads to pointless nuclear war.

What’s changed since the original Fallout?

In the early 2000s Interplay, the company that published the first two Fallout games totally collapsed, so the license got sold to Bethesda, developers of the popular open-world, single-character fantasy RPGs, The Elder Scrolls. Since that sale, Fallout games (Fallout 3, 4, and New Vegas) have looked a lot like the sci-fi versions of their TES counterparts.

Most notably, this means a focus on exploration. These games are all built around looking at a map or a compass, seeing a buildings or dungeons or towns to check out, and wandering over. Sometimes there’s a quest, sometimes there’s a little story, and sometimes a longer dungeon. There’s also a main story to pursue as well — essentially, the appeal of a Bethesda game is that there’s always a new corner of the map to check out.

There was also a switch from an isometric perspective to a first-person shooter. It didn’t have to be played as a shooter, though — a system called VATS allowed players to pause the game for RPG-style combat.

So what’s new about Fallout 4 specifically?

Not much, and that’s not necessarily a bad thing. This is a huge new map to explore, in a system that’s been adapted to encourage that. It also looks great, especially in terms of character faces, which hasn’t always been a strength of Bethesda’s games.

The primary new addition is the crafting and building system. Now every item in the game has a potential purpose — you can take it to a workshop and turn it into building materials or use it to modify gear. What’s more, there are settlements scattered across the map that your character can align with and bring under your control. This gives more of a feel of spatial progress across the course of the game — you’re literally making the Wasteland safer by helping people.

Sounds cool. But do I need to have played previous Fallout games to enjoy Fallout 4?

Nope! And I wouldn’t recommend it, unless you’re a PC gamer willing to take the time to download user modifications to perfect Fallout 3 or New Vegas, or read a guide to Fallout 1/2. Fallout 4 is probably the smoothest and most accessible of any of the series right off the shelf.