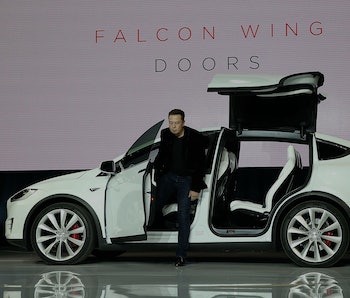 Elon Musk is fresh off a major victory at his pet project SpaceX and is letting his enthusiasm seep into his other ventures.

In a conference call with reporters regarding updates to Tesla’s self-driving cars, Musk, never one known for humility, puffed out his chest and mocked your ability to drive.

Musk added that within two to three years, the cars “will be able to drive virtually all roads at a safety level significantly better than humans.”

Musk made his pronouncements on human weakness, because Tesla was releasing the first version of ‘Summon,’ a new capability that allows owners to order their cars to drive autonomously to them.

While not particularly Earth-shattering in itself, Musk also wants you to understand why it is, going so far as to say “that within two years, you’ll be able to summon your car from across the country” before backtracking and saying the prediction “might be slightly optimistic.”

The company also announced new limits on the driving speeds of its cars, cutting the maximum velocity to 5 mph over the speed limit. Think, 50 in a 45 with no one in front of you. I’m sorry, Musk, but this is the future, and at those speeds, you’re falling behind the pack.