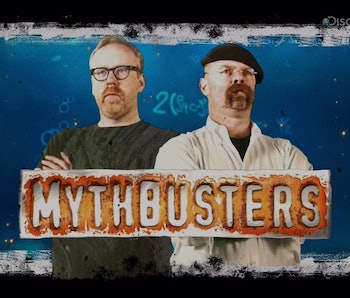 Special effects experts Adam Savage and Jamie Hyneman are two wild and crazy guys still blowing up crap after all these years. And on the first show of their final season of Discovery Channel’s MythBusters, the two admit that though they’d like to be known for “promotion of critical thought,” explosions will be their legacy.

That’s why last night’s episode offered viewers an “Explosion Special.” If you spent your pre-Christmas days in front of the MythBusters’s Science Channel marathon, you don’t need a history lesson on the show. But in case you were out buying fireworks for your little nieces and nephews, then here’s a brief background.

Before the two were paired, the cohosts had previously worked together on commercials and the BattleBots TV competition series. Each MythBusters episode tests about two myths, sometimes clustered thematically, sometimes not. The myths are gathered, in part, from fan suggestions. The hosts and crew then use their cunning and manpower to either rank these myths “busted,” “plausible,” or “confirmed.” Often they do what Savage once described as “replicate the circumstances, then duplicate the results.” Once this season concludes, the show will have shown 2,950 experiments and explored 1,050 myths.

In the “Explosion Special,” the two deal with a weapon they previously had never addressed, the land mine. They then figured out whether or not you can ride a hovercraft (which really looks like an airboat) over a minefield. At the same time, Hyneman and Savage blew up a postal truck filled with explosives and cement, testing out something that happened on a MacGyver episode, “Blow Out.” Semi-spoiler alert: Don’t believe all that MacGyver tells you.

Though the show has been on for 14 seasons, is wildly watched, and made science popular to a whole new audience, Savage and Hyneman definitely didn’t feel like they were a good match. In a recent Entertainment Weekly interview, the well-coifed Savage said of his beret-pageboy hat hybrid-wearing partner: “Jamie was never interested in the storytelling. This has been one of the primary sources of friction between us — what is experimentation and what is storytelling? I want to be as honest as possible about who I am and I like putting on costumes and making the process entertaining.” This was evident in last night’s episode where Savage took on the MacGyver persona, wearing a mullet wig and even acting out a scene in the intro.

In that October interview, Savage continued, observing one of his partner’s best and maybe worst qualities. “Jamie doesn’t give a shit about the camera, and that is also equally as compelling — he’s just being himself.”

They do have a tension that looks good on television. If not volatile, it feels like it has the potential to explode eventually. It’s most appropriate that they act out their inner drama blowing up inanimate objects rather than on each other.

More like this
Entertainment
Sep. 26, 2022
Christian Bale reveals the secrets of his “weird” transformation in Amsterdam
By Jake Kleinman
Science
8 hours ago
Ancient humans forged hybrid species at critical periods in our evolution
By Penny Spikins and The Conversation
Science
Sep. 24, 2022
Is a fact always true? A philosopher explains how to spot the difference
By Peter Vickers and The Conversation
Related Tags
Share: