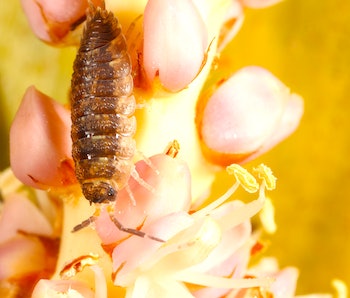 Lots of adults dislike woodlice. Some are physically revolted by them. But this distaste is cultural rather than innate since most small children are well-disposed towards woodlice and happy to handle them. Some people even keep them as pets.

Woodlice are tiny, don’t bite, move slowly, and are generally unthreatening. They are part of biological processes essential to life. So what’s not to like?

A rose by any other name...

Part of the problem is their name. There are dozens of unflattering English names for woodlice that imply completely imaginary parasitic habits (“lice”), while others (“sow-bug”) link them with dirty lifestyles. But woodlice are harmless. As it happens, they do excrete ammonia and smell bad if you confine a crowd of them in a jam jar, but who does that?

It’s also true that inside our homes, these little invertebrates are strongly associated with damp and fungal decay. But while many pest control firms offer elimination treatments, woodlice are the symptom, not the cause. They chew up soft, damp, moldy bits of wood — but your floorboards or window frames would already need to be in a bad way for this to happen.

As many schoolchildren have shown in classroom experiments, woodlice simply avoid the light, seek out moist air, and prefer places that smell of mold. So save your money. Unless you fix the underlying structural problem, they’ll be back.

Worldwide there are around 4,000 species of woodlice, with 40 species in the UK alone. They mostly look alike and are similar in size (adults are 10-15mm long). These familiar invertebrates are crustaceans related to crabs, shrimps, and lobsters. Woodlice ancestors were probably among the earliest animals to invade the land almost half a billion years ago. They live in rotting wood and soil and are abundant – one study reported densities of up to 3,000 woodlice per square meter of grassland.

Why don’t people think of woodlice as nice? Perhaps it’s because they look like little armored aliens from Star Trek. Sporting seven pairs of legs, their bodies are encased in armored plates so full of minerals containing calcium that only specialized predators can attack them successfully. These tiny creatures just bumble around in their own world, ignoring human observers.

Antagonism towards woodlice is misplaced. They are our friends. In fact, we (along with all the rest of land-based animal and plant life) would be in trouble without them. Woodlice are detritivores that eat dead plants and animals and everyone’s excrement, including their own.

Recycling waste, woodlice, and other tiny soil animals keep the wheels of the biosphere’s economy turning. All plants and animals must eventually be broken down and recycled, or there will soon be no fertile soil in which plants can grow. Woodlice start this process by chewing up detritus.

Other similar-sized soil animals, such as millipedes, also do this job but are less abundant. Woodlice aren’t the most numerous of soil animals — roundworms, springtails (minuscule wingless jumping insects), and mites all live in greater numbers — but because they are individually much bigger, woodlice can process a lot more litter overall. Once they have digested waste material and excreted it again, microorganisms continue the breakdown of this organic material.

Perhaps we should be more generous to woodlice because, in some ways, they are like us. They are, for example, one of the few invertebrates that bear live young. This is necessary because their body surfaces aren’t well waterproofed and are restricted to moist places.

While older woodlice can avoid dehydration by moving to a more suitable place, hatchlings can’t do this. So female woodlice lay their fertilized eggs into a fluid-filled brood pouch between their legs. Inside this pouch, they can develop in a safe place and are protected from drying out.

The vast majority of animals don’t have offspring that develop to an advanced stage inside their mother, as it is costly to her and restricts the number of offspring. But some crustaceans that live in the sea — including the probable ancestors of woodlice — protect their developing eggs within a brood pouch because it allows them to choose the location in which to deposit their offspring. This adaptation made it easier for woodlice to make the evolutionary transition to life on land.

Woodlice are also models for flexible sex determination. Unlike all other invertebrates, the sexual development of their reproductive anatomy and behavioral circuits in the brain are regulated by a sex-determining hormone, which causes young woodlice in the pouch to develop as males. Without it, they will become female.

Testosterone and other steroid hormones play a similar role during the fetal development of humans and other mammals. But this is very unusual among invertebrates, in almost all of which sex is determined directly by their genes.

Woodlice’s hormonal sex determination mechanism has, however, been hijacked by some strains of the bacterium Wolbachia. This is a parasite transmitted from mother to offspring in many woodlouse species. The bacterium interferes with normal hormonal sex determination, so genetically male woodlice embryos develop as functional females, which favors the parasite’s spread.

As a result, sex ratios in infected woodlouse populations are heavily biased towards females (up to 10:1). The population growth of the parasite is probably limited by the fact that it makes it difficult for female woodlice to find mates, but also because Wolbachia infection also reduces host fertility. Who would have thought the sex lives of woodlice could be so complicated?

This article was originally published on The Conversation by Stuart Reynolds at University of Bath. Read the original article here.

More like this
Science
Jan. 21, 2023
Plague study complicates a commonly held belief about the Black Death
By Samuel Cohn, Philip Slavin and The Conversation
Science
Jan. 23, 2023
Elephants could be key to saving the planet — here’s why
By Tara Yarlagadda
Science
Jan. 15, 2023
Is your dog right or left-pawed? One factor could determine their dominant hand
By Deborah Wells and The Conversation
LEARN SOMETHING NEW EVERY DAY.
Related Tags
Share: