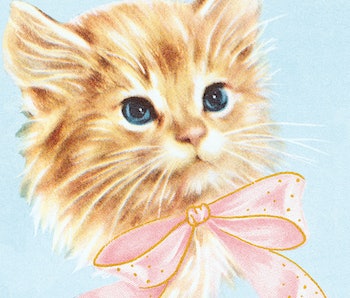 The Question has crossed most cat owner’s minds, at least once. Would their sweetly purring feline ever... choose to eat them? Is the urban legend true?

Cats, unfortunately, only sashay away when confronted by the Question — leaving owners alone with their unsettling thoughts. Luckily, cat experts are game to answer.

Why does my cat bite me?

Cats are hunters. Their strong bite, in turn, comes in handy — whether it’s gripping a dead mouse or nibbling on your finger.

Vanessa Spano is an associate veterinarian at Behavior Vets NYC and a resident at the American College of Veterinary Behaviorists. Many cat owners come to the veterinarians with perfectly natural concerns about their cats’ bite, Spano tells Inverse. However, while being bit is never fun, it’s not exactly a sign of your cat’s hidden desire to consume your flesh.

Instead, your cat’s probably just playing with you, Spano says. This biting behavior, known as “mouthing,” mimics the play of young kittens.

Biting can also expose bigger concerns about the cat’s state of mind.

“When this behavior is directed towards a human, there is usually an emotive motivation,” Spano says. This likely stems from underlying fear and anxiety, not predatory behavior.

Fear is a particularly strong trigger for cat biting, Spano explains. Practically, it typically serves as a way for the animal to get away from the thing that’s scaring it.

But cats will often use other ways to show they are scared prior to the actual bite, Spano says. These include:

Is it normal to wonder if my cat will eat me?

It’s worth unpacking the psychology behind this question. What does it tell us about the tenuous relationships that humans have with their pets?

“There is certainly an ethological, biological rationale behind a human questioning another animal's desire to eat him [or] her,” Spano says.

She does admit the fear is not irrational. Domestic pets can, on rare occasions, become aggressive towards their human housemates. Cats specifically may exhibit “predatory behavior” toward small, skittish creatures, including small-breed dogs, rats, birds, deer, and “unfortunately, human babies and toddlers,” Spano says.

But it’s far more likely that a cat would chow down on wild prey rather than its human companions, Spano says.

“I would say these situations certainly may arise,” she says. “But for your stereotypical domestic house-cat, [these situations] are very, very rare and instead would be more directed towards wild, prey animals.”

Would a cat eat its owner?

First off: if you’re worried about Mr. Whiskers chomping on you while you live and breathe, rest easy. Mikel Delgado, a cat expert at Feline Minds and a postdoctoral fellow School of Veterinary Medicine at UC Davis, tells Inverse cats won’t typically chow on their living owners.

“People do not need to worry about their cat eating them while they are still alive,” Delgado says.

But things get a little dicier — and grimmer — when we turn to dead humans.

Imagine this scenario: a human dies, leaving its cat without food for days or even weeks. You can predict how the scenario might naturally unfold.

There have been a small handful of studies concerning cats eating humans.

“There is a possibility that a cat would eat some of their owner's body... “

In one 1994 study published in the American Journal of Forensic Medicine & Pathology, researchers found some cats consumed the head, neck, and arm of their dead owner — not unlike the scenario posed by Delgado.

A 2020 study published in The Journal of Forensic Sciences, meanwhile, presents a gruesome finding in relation to feral cats. These are free-roaming domestic cats that are born and live in the wild.

In the study, scientists placed human corpses outside a research station in Colorado before observing cats scavenging the discarded remains. The forensic investigators found that both bobcats and feral cats prefer fresh flesh in the early stages of decomposition. Bobcats tend to feast on the arms, hips, and thighs, feral cats preferred to munch on the face.

What type of cat is most likely to eat its owner?

It’s hard to know how to apply these findings on feral cats to house cats — domestic animals that don’t typically spend much time, if any, in the wild.

However, Delgado says we can apply these findings to domestic cats because they are of the same species.

“Feral cats are often used to hunting and finding their own food, but their dietary needs are basically the same,” he says.

“If a cat is starving, there is no reason to think they would not eat available meat, even if that was human flesh,” Delgado says.

Melissa Connor, a co-author of the 2020 feral cats study and director of the Forensic Investigation Station at Colorado Mesa University, ultimately agrees with Delgado.

“Feral and domestic cats do seem to have different scavenging patterns,” Connor says. However, these different eating habits aren’t the result of domestic cats forming bonds with humans. Instead, the habits relate to the “condition of the body at the time of scavenging” or the cat’s experience “in consumption of whole animal carcasses.”

So, it’s possible that a domestic cat that spends extensive time outdoors hunting would consume animal — and human — carcasses in a similar way to feral cats. But ultimately, both domestic and feral pets would eat humans under the right circumstances, according to Connor.

This includes dogs too.

“Both domestic dogs and cats will scavenge deceased humans, particularly in cases where they are shut into a house [or] apartment and have no other source of food and water.”

Spano, however, isn’t quite so sure. She argues that both genetics and socialization habits differentiate feral and domestic cats.

Of course, house cats, like any other animal, display innate predatory behaviors “encoded within their genetics.” These behaviors include stalking, hunting, chasing, biting, and, even, killing, Spano explains. However, environments can influence how these behaviors are acted upon.

Based on the close social bonds formed between cat and human over many years of evolution, it’s unlikely that house cats will hunt and eat humans, she argues. The emphasis is on the hunt.

“Predation of your typical house-cat towards its human cohabitants is not really necessary for survival and thus relatively uncommon,” Spano says.

The Inverse analysis — All three of our experts agree: your cat may not chomp off your arm while you’re still breathing.

But it may be a different ball game once you’re dead. It’s hard to say for certain whether or not a cat will eat a dead corpse, as it depends on the circumstances.

In short: Be good to your cat in life and hope that your feline will be good to you in death.

“The majority of domesticated cats will realistically not prey on their adult human parents,” Spano says. “There are thousands of years-worth of generations separating your current domestic feline from its carnivorous ancestors.”