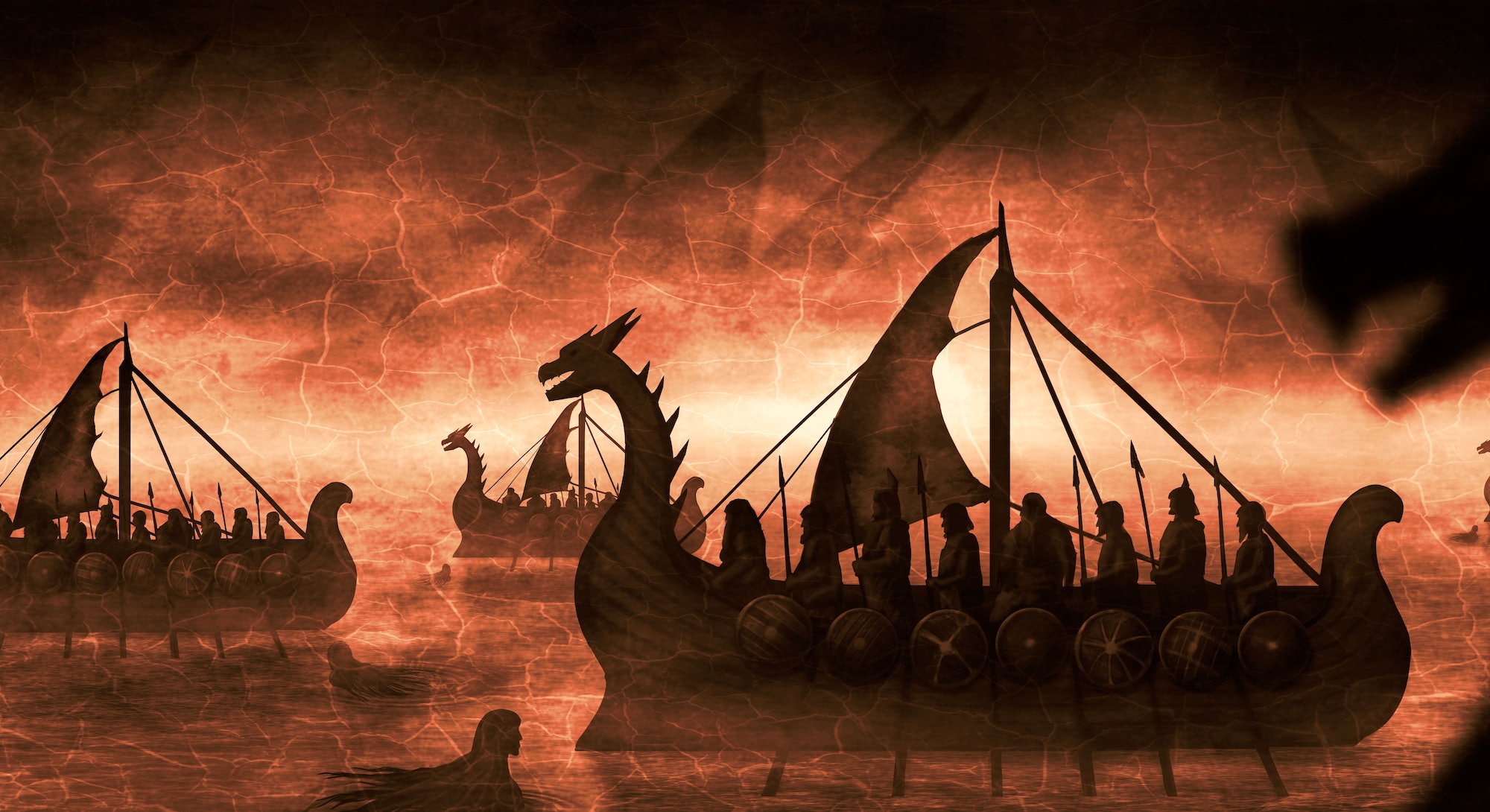 In the spring of 2020, when the world was in the midst of a global pandemic, a group of scientists published a research paper on the origins of the variola virus, better known as smallpox.

The team had, for the first time, managed to extract the virus’s DNA from ancient skeletons. This, they claimed, demonstrated that it was found in Europe as early as AD 600. And it just so happens that this had everything to do with the Vikings and their connections to the Silk Roads.

The Viking Age was marked by an unprecedented outwards expansion from Scandinavia: as far as Newfoundland in the West, the Mediterranean in the South, and the river systems of what is now Russia, Ukraine, and Belarus in the East. New research shows these eastern networks, which were founded on trade far more than on raids, are the key to understanding the Viking Age as a whole. Trading settlements sprung up along the eastern rivers connecting people from the north down to Constantinople — known to the Vikings as Miklagard — and as far as the capital of the Islamic caliphate, Baghdad. Globalization is an appropriate term for this phenomenon, linking the far north to established trading networks like those that formed the Silk Roads.

There is, however, one less desirable effect of this globalization that we are only now beginning to shed light on.

In their 2020 study, the geneticists sampled 525 individuals dating back as far as 30,000 years ago. Among all of these, they identified thirteen people who had died with a smallpox infection. Eleven of these dated to either the Viking Age or up to two hundred years before, while the last two individuals dated to modern times. Despite including material from all across Eurasia and the Americas, all of those with the virus came from skeletons found in Scandinavia, England, and Russia and to sites associated with the Vikings. Radiocarbon dates from three of the samples suggested the virus had been prevalent in these locations almost two hundred years before the Viking Age began. But a closer examination of the skeletons reveals something important: that those earlier radiocarbon dates were skewed and that the virus only moved up to north-western Europe once the Vikings had left their indelible mark on the world. The key to understanding this lies in investigating what some of those individuals ate rather a lot of, namely fish.

Radiocarbon dating of human remains relies on measuring the decay of carbon-14, the radioactive isotope of carbon. We accumulate carbon in our bodies through the food that we eat, but there is a crucial consideration: some sources of carbon can make radiocarbon dates seem older than they really are. Dating carbon from land-based food sources is pretty straightforward and the results we get from a lab can be well trusted. However, if someone has consumed a fair amount of fish or other seafood, the results will be different. This is because carbon ultimately arrives on planet earth from the atmosphere, where it gets into the food chain — and ultimately humans — through processes like photosynthesis. But when carbon finds its way into oceans, rivers, and lakes, it tends to circulate for a very long time: on average, about 400 years in the northern hemisphere. This means that when that carbon becomes part of a fish’s diet, it may already be very old. This older carbon then finds its way into a fish-eating human and the result is that the radiocarbon dates produced by a lab seem artificially too old, in a process known as marine reservoir effects (MREs). Archaeologists, therefore, have to estimate how much of a marine diet an individual had and as a result, the MREs can be corrected.

For the smallpox samples, at least two of the individuals sampled showed evidence of high marine diets. By making the appropriate corrections, this pushes the dates forward, meaning that the virus was only identified in samples from the Viking Age. This is important because it shows that it was the widespread movement of people and goods — that early globalization — that allowed the virus to spread. This is remarkable in itself, but digging deeper into the material reveals even more about exactly how the virus spread across northern Europe.

In 2008, archaeologists were called in to investigate a building site at St John’s College at the University of Oxford, where an extension was due to be built. During the excavations, the team found something entirely unexpected: a mass grave containing thirty-five male skeletons. The bodies seemed to have been thrown in a pit, with several skeletons having multiple injuries including blade wounds. The men had been robustly built and tall, mostly aged between sixteen and thirty-five at the time of death. Some of the bodies showed evidence of charring, suggesting that they had been exposed to burning before they were buried. There were no grave goods. This, clearly, was the result of a massacre and radiocarbon dates placed the grave around AD 900–1000. One of the eleven samples with the smallpox virus happened to come from a man who was found in the middle of this mass grave. The man had several blade wounds to his upper body, including one to the back of his head and several to his ribs and shoulder blade. The injuries were severe and are likely to have killed him, not the smallpox he was infected with at the time of his death.

Before the virus was discovered in this skeleton, there had been no evidence that smallpox was present in England. So where had this man picked it up? His likely identity could give us important clues. It has been suggested that the men in the grave could be victims of the so-called St Brice’s Day massacre that took place in Oxford on 13 November 1002. By this point, in the 11th century, Scandinavians had settled extensively across England, especially in the north and east, and there were ongoing political disputes between the newcomers and the English. According to historical documents, on that particular day, the English king Aethelred the Unready ordered the killing of ‘all the Danes who had sprung up in this island, sprouting like cockle amongst the wheat’, including a massacre in Oxford. It has been proposed that this is precisely what led to the St John’s College killing.

Detailed forensic analysis has been carried out on the bones in attempts to find out if this is, in fact, the case. One method, looking at strontium and oxygen isotopes in their teeth, proved to be inconclusive. The method relies on the fact that our bodies are, essentially, like walking diaries of our lives: everything we eat and drink turns into the building blocks that our skin, hair, and bones are made of. And these building blocks include chemical signatures known as isotope ratios that are specific to geographical areas that can tell us where our food was grown or where our drinking water once fell as rain. Teeth and bones preserve these isotope ratios for thousands of years in the archaeological record. For the St John’s college bones, unfortunately, the isotope data were not distinctive enough to tell us if the men had grown up in England or in Scandinavia: they could have come from either. It was therefore unclear if the men in the grave were recent arrivals or residents.

Their recent diets, however, gave another crucial clue. Isotopes can also tell us whether someone eats mainly a meat, plant, or fish-based diet. By comparing isotopes in their ribs and femurs (thigh bones), archaeologists were able to show that the men had recently adopted more marine diets. This is because ribs, being small and thin, form new bone quickly, so any change in diet shows up in the bone within two to five years. Femurs, on the other hand, are large and thick and reflect an individual’s average diet over up to fifteen years. For this reason, the researchers concluded that the group as a whole had likely changed their eating patterns in very recent times. This could be consistent with having traveled, and that is exactly where we may, rather unexpectedly, find a clue to the source of the virus. The geneticists who studied the Oxford grave were initially looking at ancestry across the entire Viking world, working on samples from across Europe. Surprisingly, they found a match between a different man buried in the mass grave and someone much further afield. This second man’s half-brother (or other second-degree relative, like an uncle and nephew, or grandfather and grandson) was discovered in a cemetery in Denmark at a site called Galgedil. And it just so happens that this half-brother in Denmark also carried the smallpox virus. What this could indicate is that the men in Oxford — likely part of a raiding party or military group — had lived in close proximity to each other and may recently have come over from somewhere like Galgedil, where they may have picked up the virus in the first place.

Just as with a modern pandemic that we are now all so familiar with, widespread travel and a high level of mobility — comparatively speaking — was likely a crucial factor explaining why smallpox seems to have appeared in north-western Europe during the Viking Age. While there is no definite evidence of where this virus was picked up from in the first place, when we look at the samples of those who had it something is very clear. Many of the individuals came from locations that displayed a very high level of mobility and an influx of international traders: several were from the island of Öland near Gotland, an important trading post situated between east and west. One Swedish burial with the virus had strong connections with the Baltic, as strontium isotope data suggested that she had grown up on Gotland. Another individual buried in Sweden was a man who, the excavators stated, had been buried in Slavic fashion, suggesting he too was a migrant from the south or east. The final two came from Gnezdovo, a Rus’ site in the upper Dnieper region. But that is not all. Digging through the archaeological reports of these eleven skeletons reveals that in the past, two of those with the virus were interpreted to have been slaves because of the way they were buried. While we should be careful about interpreting unusual burial rites as indicative of enslavement, if this really was the case, the two could plausibly have traveled from far further afield. They may also have been exposed to conditions that were very conducive to the spread of the disease.

The smallpox study is not the first time a virus has been linked to Viking movements. In 2017, the spread of a particular strain of leprosy was traced from Scandinavia to England through the discovery of Mycobacterium leprae in a female skeleton. The following year, researchers discovered that leprosy in Ireland in the medieval period had also come from Scandinavia. Both these cases may have been linked to the trade in squirrel fur. The links to the east or to Baltic trading posts are striking in the smallpox example. Perhaps that should not surprise us, because this is precisely where global connections to parts of the world that were previously inaccessible could now be found. Pathogens could, in particular, be transmitted through goods like furs, one of the key elements of the eastern trade. The riverine networks allowed for goods and people to flow from east to west, and from south to north, with unprecedented speed, meaning that stowaways like the variola virus could easily have moved along with them. The results obtained in these new studies may just be the tip of the iceberg.