Does Venus have alien biosignatures? Why the biggest debate in astronomy burns so hot

“We really have no good explanation for why phosphine should be in Venus's atmosphere.” 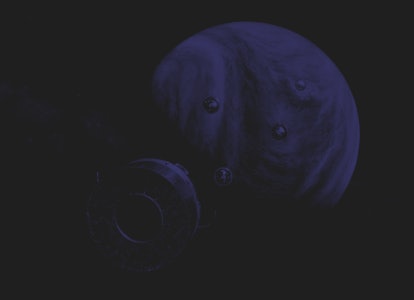 The debate over the habitability of Venus continues to burn as hot as the planet’s scorching temperatures.

Astronomers have found signs of phosphine and other chemicals in the clouds of Venus while digging through old data from NASA’s Pioneer Venus Multiprobe, which launched in 1978.

What these new findings could answer, however unlikely, is the question in astronomy: Does life exist off Earth?

In that decades-old data are clues about the presence of phosphine in Venus’ clouds. Phosphine is often produced by extremophile microbes on Earth, leading scientists to believe that if there’s phosphine on Venus, it may be coming from a biological source.

So, yeah, aliens. But the back-and-forth between scientists debating the phosphine question is nearly as big as the question they are trying to answer.

Their discovery is detailed in a study published in March in the scientific journal Geophysical Research Letters.

Venus may be similar to Earth in size, mass, and density, but the second-closest planet to the Sun is far more intense: The surface of Venus boasts temperatures that reach up to 900 degrees Fahrenheit, thanks to a dense carbon dioxide atmosphere that traps heat, and a hellish volcanic landscape to match the dire surroundings.

On the shortlist of planets that could be potentially habitable, modern-day Venus rarely makes the cut.

But what if the infernal hell of Venus actually hosts life?

The scientists found chemical signatures in the clouds of Venus that support the presence of phosphine, hydrogen sulfide, nitrous acid, and other biologically relevant chemicals that could indicate microbial activity.

Is there evidence for life on Venus?

WHAT'S NEW — Rakesh Mogul, professor of biological chemistry at California State Polytechnic University, Pomona, and lead author of the new study, tells Inverse that the discovery reveals interesting chemistry that’s happening on Venus, which could confirm the presence of chemicals associated with life. It was his team that discovered the archival phosphine signatures in the middle clouds of Venus.

The findings suggest that there are perhaps unknown chemistries taking place on Venus, or that its clouds have their own chemistry that is different from the atmosphere below.

Another implication has to do with Venus’ potential habitability, and that perhaps microorganisms are helping sustain this type of chemistry, according to the authors.

HOW THEY FOUND IT — The team behind the new study was so intrigued by the previous results showing phosphine gas in Venus’ clouds that its members dove into old data collected on Venus to see if any clues were hiding from researchers.

By re-examining 42-year-old archived data from NASA’s Pioneer Venus Multiprobe, which examined the composition of Venus’ atmosphere, the team was able to identify the chemical signatures of phosphine and other molecules.

“I don't think anybody was looking for trace species in that set of data,” Mogul says. “The original investigators did a nice job of looking at the major constituents, but they didn't drill down and look at the trace species, and we found low counts for a number of things that they just sort of disregarded or perhaps didn't consider to be important.”

HERE’S THE BACKGROUND — In September 2020, a potentially groundbreaking discovery on Venus claimed to provide evidence for potential life being harbored in Venus’ clouds.

Using the James Clerk Maxwell Telescope in Hawaii, and the Atacama Large Millimeter/submillimeter Array in Chile, scientists detected traces of phosphine gas in Venus' atmosphere. Phosphine is considered a biosignature gas on Earth, meaning that it is typically produced by a living organism.

The hypothesis of life on Venus is centered around the cloud’s droplets, because that’s where you have liquid on the planet; therefore, that’s where scientists expect life to exist on Venus.

When searching for signs of life on other planets, scientists look for traces of these “bio-signature” gases to help them identify if a planet is potentially habitable.

The results were met with skepticism that the signal was produced by phosphine, or that it would have been produced by microbes that live in the clouds of Venus.

Michael Wong, a researcher in astronomy at the University of Washington, and a team of astronomers conducted a follow-up study of the initial findings.

“We really have no good explanation for why phosphine should be in Venus's atmosphere.”

“We really have no good explanation for why phosphine should be in Venus's atmosphere so we wanted to check the calculations for the discovery of phosphine,” Wong tells Inverse. “And so we did our own calculations and found a different interpretation of the initial discoveries.”

What if it’s just sulfur dioxide though? — Through their own study, the team found that phosphine was not reproducible in their models, and instead suggest that sulfur dioxide, a common gas in the atmosphere of Venus, is likely what was detected instead of phosphine. (Truly a bummer for alien hunters.)

On the other hand, Mogul’s study provides further evidence that there are signs of phosphine in Venus’ clouds, but it does not claim that this shows potential for life on Venus.

“There's habitability and then there's the actual biosignature,” Mogul says. “Habitability is a much softer term and it could mean that it was habitable or it could be habitable in the future, while biosignature is a little harder.”

Mogul explains that claiming to find evidence of biosignatures indicates that this chemical is being produced from life now, or that it somehow got preserved, and is indicative of a past habitat — or even a future one.

“So I think when it comes to biosignatures, we do need to be very cautious how exactly we interpret it,” Mogul says. “But if we dial back and talk about habitability, then things are a little bit easier to discuss, because it doesn't have to be life now.”

Relevant to life — While the new study identifies chemicals that are relevant to life, the authors don’t claim that it is necessarily produced by or supported life.

The discovery of life on another planet is a major claim and one that would not be based on a single discovery.

“I don't see the extraordinary evidence”

When it comes to these types of discoveries, Wong says there’s a need to emphasize that science is a process, and that it would take a series of repeated experiments, measurements, and hypotheses that are refined and changed over time before scientists prove that life exists on another planet.

WHY IT MATTERS — Astronomers believe Venus may have looked very different at a point in its early history and may have even had water flowing on its surface. However, as the planet heated up, the oceans evaporated, and its surface temperature became so hot that any life would have been destroyed.

Venus' atmosphere consists mostly of carbon dioxide and traps heat in the same way that greenhouse gases do here on Earth. That's why Venus often serves as an eerie vision of what Earth's future may look like if we don't get greenhouse gas emissions under control.

Examining the potential habitability of Venus would not only answer the question of whether or not life began on other worlds, but it would also inform us of the potential future of our own world.

“Venus is so similar in terms of history and early formation to Earth, yet its current environment is totally different,” Mogul says. “So for that reason, you know, it's kind of a nice allegory to perhaps look at what could happen to Earth in the future.”

WHAT'S NEXT — Scientists are hoping for further observations of Venus through future missions that can confirm the presence of phosphine in its clouds and look for other signs of biosignatures.

Mogul hopes that NASA’s proposed DAVINCI (Deep Atmosphere Venus Investigation of Noble gases, Chemistry, and Imaging) mission, which is meant to conduct an atmospheric probe of Venus, receives enough funding to launch in the near future.

Abstract: We present a re‐examination of mass spectral data obtained from the Pioneer Venus Large Probe Neutral Mass Spectrometer. Our interpretations of differing trace chemical species are suggestive of redox disequilibria in Venus’ middle clouds. Assignments to the data (at 51.3 km) include phosphine, hydrogen sulfide, nitrous acid, nitric acid, carbon monoxide, hydrochloric acid, hydrogen cyanide, ethane, and potentially ammonia, chlorous acid, and several tentative PxOy species. All parent ions were predicated upon assignment of corresponding fragmentation products, isotopologues, and atomic species. The data reveal parent ions at varying oxidation states, implying the presence of reducing power in the clouds, and illuminating the potential for chemistries yet to be discovered. When considering the hypothetical habitability of Venus’ clouds, the assignments reveal a potential signature of anaerobic phosphorus metabolism (phosphine), an electron donor for anoxygenic photosynthesis (nitrite), and major constituents of the nitrogen cycle (nitrate, nitrite, ammonia, and N2).